All you need to know about the planet and all its facets
A weekly look at the world around us – how we affect it, and how it affects us. Saturdays at 11:40am Paris time.

Visit:  http://www.lemuseeimaginairedepaulveyne.sitew.comfor more introductions and commentaries of some of the greatest painting ever made!

Stevie Nicks & Lindsey Buckingham – Never Going Back Again (Live) (one of the greatest compositions ever!)

Been down one time
Been down two times
I’m never going back again
[ Lyrics from: http://www.lyricsfreak.com/f/fleetwood+mac/never+going+back+again_20054283.html ] Yacón Tea and glycemic index ( there may be natural rememedies out there, worth trying)

Yacón Tea is a tea that is made from the leaves of the Yacón plant which is indigenous to the Andes.

The leaves have been used by ancient civilizations in South America for centuries and it has been introduced recently to western societies. The tea is used by many diabetics since the tea reduces blood sugar level. Research has been done about this property of the Yacon leaves in Argentina and it showed that a normal dose of tea (three servings per day) over a 30 day period actually reduced glucose levels, increased plasma insulin and other body characteristics improved such as body weight, and renal parameters. Because of this sugar reducer property, the product is becoming popular among people with diabetes and dieters.

More about yacon (from Wikipedia):

The Yacón (Smallanthus sonchifolius, Syn.: Polymnia edulis, P. sonchifolia) is a perennial plant traditionally grown in the Northern and Central Andes from Ecuador to Argentina for its crisp, sweet-tasting tuberous roots. The texture and flavour are very similar to jicama mainly differing in that yacon has some slightly sweet resinous and floral (similar to violet) undertones to its flavor. This flavoring is probably due to a sweet substance called inulin, as replicates the sweet taste found in the roots of elecampane, which also contains this substance. Another name for the yacón is Peruvian ground apple. The tuber is composed mostly of water and fructo-oligosaccharides.

Commonly called “jicama” in Ecuador, yacón is sometimes confused with this unrelated plant. Yacón is actually a close relative of the sunflower and Jerusalem artichoke. The plants produces a perennial rhizome to which the edible succulent storage roots are attached, the principal economic product of the plant. The rhizome develops just under the soil surface and produces continuously the aerial shoots. Dry and/or cold seasons cause the aerial shoots to die back, but the plant re-sprouts from the rhizome in favourable conditions of temperature and moisture. The edible storage tubers are large and typically weigh a few hundred grams to one kg.

Yacón plants can grow to over 2 meters in height and produce small, yellow inconspicuous flowers at the end of the growing season. Unlike many other root vegetables domesticated by the Indigenous Peoples of the Andes (ulluco, oca) and mashua, yacón is not photoperiod sensitive, and can produce a commercial yield also in the subtropics.

Yacón storage roots are traditionally used by farmers at mid-elevations in the eastern slopes of the Andes that descend toward the Amazon. Yacon is grown occasionally along field borders where the juicy roots provide a welcome source of refreshment during field work. Until as late as the early 2000s, yacon was hardly known outside of its limited native range, and was not available from urban markets, however press reports of its use in Japan for its purported anti-hyperglycemic properties made the crop more widely known in Lima and other Peruvian cities. Companies have also developed novel products such as yacón syrup and yacón tea. Both products are popular among diabetic people and dieters. 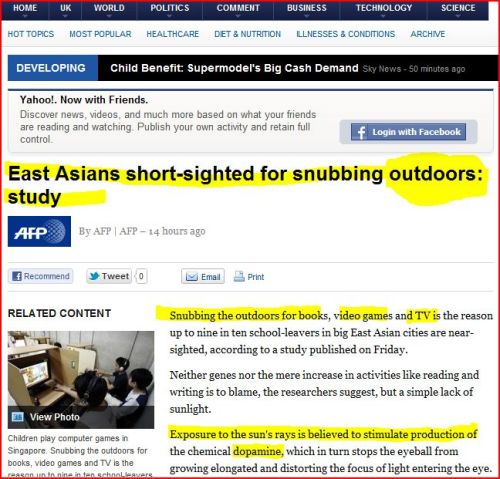 Snubbing the outdoors for books, video games and TV is the reason up to nine in ten school-leavers in big East Asian cities are near-sighted, according to a study published on Friday.

Neither genes nor the mere increase in activities like reading and writing is to blame, the researchers suggest, but a simple lack of sunlight.

Exposure to the sun’s rays is believed to stimulate production of the chemical dopamine, which in turn stops the eyeball from growing elongated and distorting the focus of light entering the eye.

“It’s pretty clear that it is bright light stimulating dopamine release which prevents myopia,” researcher Ian Morgan of the Australian National University told AFP of the findings published in The Lancet medical journal.

HARLEY-DAVIDSON FROM JAPAN WASHES UP IN CANADA

Harley-Davidson from Japan Washes up in Canada

Debris from last year’s devastating Japanese tsunami has been washing up on North American shores for some time, but few items have been returned to their owners because much of what has been found bears no identifying marks that would indicate where it came from or to whom it belonged. Recently, however, the owner of a Harley-Davidson motorcycle that washed up on a Canadian beach was identified thanks to the bike’s license plate. The man lost his home and three relatives in the disaster and is looking forward to getting his Harley back. The bike is now rusty and corroded from its wet 4,000-mile (6,400-km) journey, but the shop that sold it plans to restore it. More…