Let a fool be made serviceable according to his folly.

Anderson was the first licensed female physician, as well as the first female mayor, in England. Denied admission by many medical schools, she studied privately with physicians before finally earning a license from the Scottish Society of Apothecaries. Largely as a result of her efforts, British examining boards later opened their examinations to women. Anderson championed the idea of medical care by female doctors for female patients. What was her New Hospital for Women later renamed?More… Discuss

This Day in the Yesteryear: SECRETARIAT WINS THE TRIPLE CROWN (1973)

Thoroughbred racehorse Secretariat was the first US Triple Crown champion in 25 years, setting records in the Kentucky Derby and Belmont Stakes that still stand today. In fact, in the 40 years since, only one Derby winner has even come close to matching Secretariat’s time of 1:59.40. Secretariat advanced from last to first to win the Preakness and won the Belmont Stakes by an unprecedented 31 lengths. What controversy arose regarding the time calculations of the 1973 Preakness? More… Discuss

Posted in IN THE SPOTLIGHT, PEOPLE AND PLACES HISTORY, GEOGRAPHY, Uncategorized

Currently, definitive tests for Down syndrome in fetuses—chorionic villus sampling (CVS) and amniocentesis—are invasive and somewhat risky, carrying a one in 100 risk of miscarriage. Existing non-invasive preliminary tests are somewhat imprecise and call for further testing in 3 to 5 percent of pregnancies. By contrast, a simple new blood test that analyzes fetal DNA in maternal blood can detect whether a fetus has Down syndrome with a high degree of certainty and could reduce the need for these invasive procedures. More… Discuss

Posted in ARTISTS AND ARTS - Music, Educational, IN THE SPOTLIGHT, Photography, Uncategorized 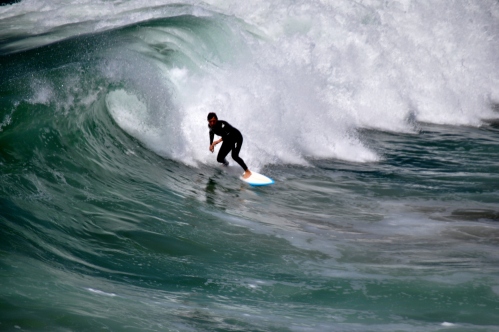 Another Perfect Ride (My Photo Collection)

Posted in ARTISTS AND ARTS - Music, Educational, IN THE SPOTLIGHT, Photography

Former drone operator says he’s haunted by his part in more than 1,600 deaths

Published on Jun 6, 2013
A former Air Force drone operator who says he participated in missions that killed more than 1,600 people remembers watching one of the first victims bleed to death Brandon Bryant says he was sitting in a chair at a Nevada Air Force base operating the camera when his team fired two missiles from their drone at three men walking down a road END_OF_DOCUMENT_TOKEN_TO_BE_REPLACED

NSA Is Wired Into Top Internet Companies’ Servers, Including Google and Facebook ~ Wired

Should this concern anyone?

“These two meetings are going to be important because of what [the media] will say – is it a lot of jaw-jaw and everything will get worse? Or maybe it’s the beginning of a realisation that the world will no longer be the same and we are going to do something about it.”

A meeting in June in Europe of the Bilderberg Group – an informal club of leading politicians, businessmen and thinkers chaired by Mr. Davignon – could also “improve understanding” on future action, in the same way it helped create the euro in the 1990s, he said.

“While members of the group held different views as to the method by which a common market could be set up, there was a general recognition of the dangers inherent in the present divided markets of Europe and the pressing need to bring the German people, together with the other peoples of Europe, into a common market. That the six countries of the Coal and Steel Community had definitely decided to establish a common market and that experts were now working this out was felt to be a most encouraging step forward and it was hoped that other countries would subsequently join it. The need was generally accepted to press forward with functional integration in the economic domain particularly with regard to the industrial utilization of atomic energy.

It was generally recognized that it is our common responsibility to arrive in the shortest possible time at the highest degree of integration, beginning with a common European market. It was also generally agreed that the tariff walls surrounding this common market should certainly not be higher and should possibly be lower than the average of the existing tariffs now applied by the individual countries concerned. “

Bilderberg Has Press Thrown Out Of Hotel

The Bilderberg Group ordered a hotel at which journalists from Infowars were set to stay to cover the organization’s secretive confab next week to cancel the reservations in an unprecedented attempt to block freedom of the press.

Alex Jones and his reporters all received phone calls from the Grove Hotel in Watford, England today informing them that their reservations — which ran until the day before Bilderberg are set to meet in the same location — had been cancelled.

The manager of the hotel informed us that due to “consultations with the security services” in preparation for a big conference taking place next week, all the rooms had been cancelled.

When asked if Jones and his crew were considered a “security risk,” the hotel manager responded “I’m not implying that,” suggesting that the rooms were cancelled simply because Bilderberg ordered the Grove to do so.

The Bilderberg group holds an annual summit to discuss global policy – and this time around it is meeting in Watford, Hertfordshire.

This year’s guest list of 140 high-ranking figures includes Chancellor George Osborne and his Labour shadow Ed Balls, the CEOs of Google and Amazon as well as royalty from around the world.

But no minutes of the meeting are taken and no journalists are allowed inside the secretive four-day event, which counts Tory Cabinet minister Ken Clarke among its organisers.

Labour MP Michael Meacher is critical of the “closely guarded secrecy” of the conference.

“This is the most important gathering of the most powerful people in Western capitalism that there is,” he told Sky News.

“It is clearly is going to have an impact on government policy otherwise why is the Chancellor for the fifth time attending and Kenneth Clarke. “And as far as I know there will be no statement in the House following it saying what happened and how it might affect government policy.

“This is totally in contradiction to the Government’s commitment to have greater transparency.”

When delegates arrived in cars with blacked-out windows at The Grove hotel, protesters heckled their vehicles as they disappeared down the driveway.

A five-metre steel fence has been erected around the £210-per-night hotel and security is so tight that Watford residents are being forced to show passports, driving licences or other ID at police checkpoints.

Journalists and a handful of protesters are in a pen just inside the grounds, but behind the steel fence and around half a mile from the booked-out hotel. Mr Meacher is among the group: “I’m standing about half a mile away and can’t get any closer to the actual conference.

“We’re all kept out and that cannot be right.”

The meeting also comes as a new lobbying scandal grips Westminster, forcing the Government to bring forward a bill to crack down on lobbying.

Mr Meacher added: “After the scandals which we heard about in the Lords last week, David Cameron said he was going to set up measures to ensure there was proper regulation of lobbyists – and in particular transparency.

“If there is any conference which required transparency, which required democratic accountability, it is the Bilderberg conference because this is really where the top brass of Western finance capitalism meet in order to make their deals, listen to each other, lobby – including government ministers.” Bilderberg, which formed in 1954, is making an attempt to change its reputation as one of the most clandestine and controversial meetings in the world; it is the first time the guest list and its limited agenda have been publicly released and journalists are allowed near the grounds.

The group defends its “off-the-record” approach on its website: “Thanks to the private nature of the conference, the participants are not bound by the conventions of office or by pre-agreed positions.

“As such, they can take time to listen, reflect and gather insights.”

So whether Google’s Eric Schmidt and Amazon’s Jeff Bezos chat about the current issue of tax avoidance in the UK as they mingle with ministers at the Grove may never become public.