What became of the Lost Colony? (Virginea Pars map, drawn by John White during his initial visit in 1585: Roanoke Island.) 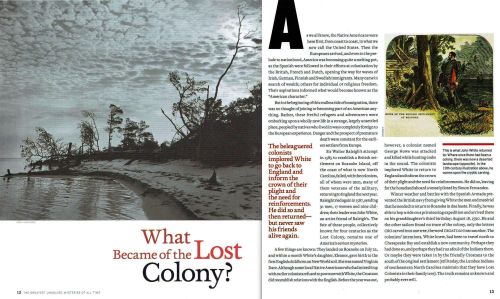 The Roanoke Colony, also known as the Lost Colony, established on Roanoke Island, in what is today’s Dare County, North Carolina, United States, was a late 16th-century attempt by Queen Elizabeth I to establish a permanent English settlement. The enterprise was originally financed and organized by Sir Humphrey Gilbert, who drowned in 1583 during an aborted attempt to colonize St. John’s, Newfoundland. Sir Humphrey Gilbert’s half-brother, Sir Walter Raleigh, later gained his brother’s charter from the Queen and subsequently executed the details of the charter through his delegates Ralph Lane and Richard Grenville, Raleigh’s distant cousin.[1]

The final group of colonists disappeared during the Anglo-Spanish War, three years after the last shipment of supplies from England. Their disappearance gave rise to the nickname “The Lost Colony”. To this day there has been no conclusive evidence as to what happened to the colonists.