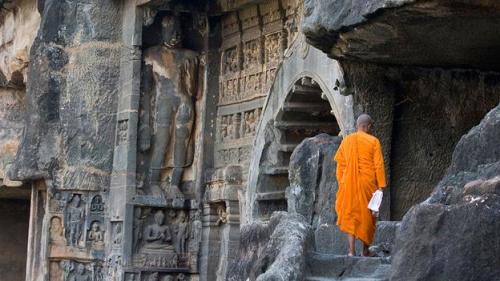 The Ajanta Caves, 30 spellbinding Buddhist prayer halls and monasteries carved, as if by sorcery, into a horseshoe-shaped rock face in a mountainous region of India’s Maharashtra state, 450km (280 miles) east of Mumbai, were ‘discovered’ by accident in 1819.

Unknown for more than 1,000 years except to wild animals, insects, flood waters, prodigious foliage and perhaps the local Bhil people, this magnificent work of art, architecture and contemplation, was abandoned by those who created it as long ago as AD 500. In 1983 it was designated a Unesco World Heritage Site.

John Smith, a young British cavalry officer, was on a tiger hunt when he spotted the mouth of a cave high above the Waghora (Tiger) River that could only have been man made. Scrambling up with his party, Smith entered the cave and, branding a flaming grass torch, encountered a great vaulted and colonnaded hall, its walls covered in faded paintings. Beneath a dome, a timeless praying Buddha fronted a mound-like shrine, or stupa