this pressed for your Information: Putin says Russia was ready to activate nuclear arsenal over Crimea – LA Times 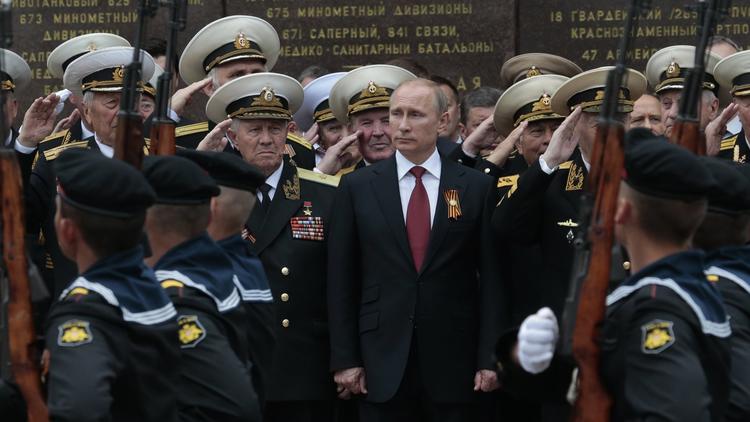 Russia would have activated its nuclear arsenal if necessary a year ago when its troops secured the Crimean peninsula and carried out a referendum on the strategic peninsula’s secession from Ukraine, Russian President Vladimir Putin said in a documentary that aired Sunday.

Crimean painters touch up a mural depicting Russian President Vladimir Putin in a navy uniform ahead of celebrations planned this week, a year after the March 18, 2014, annexation of Crimea. (Yuri Lashov / AFP/Getty Images)

In the report timed to Monday’s anniversary of the referendum, “Crimea: Path to the Motherland,” Putin justifies Moscow’s seizure of the Black Sea territory as necessary to protect Russians and military bases from what he described as a nationalist junta that had taken power in Kiev.

Putin accused the United States of masterminding the three-month uprising in the Ukrainian capital that ended with the ouster of Kremlin-allied President Viktor Yanukovich, who has since taken refuge in Russia.

While the documentary was clearly prerecorded, it served to project a vibrant and defiant image of the Russian president, who hasn’t been seen in public for more than a week, spurring rumors that he is sick or has been deposed in a palace coup.

The Kremlin website on Sunday also carried a message of condolence from Putin on the death of Russian writer Valentin Rasputin.

This entry was posted in Educational, IN THE SPOTLIGHT, News, PEOPLE AND PLACES HISTORY, GEOGRAPHY, Special Interest, Uncategorized. Bookmark the permalink.