This Pressed: Politics: The Paradox of Paul Ryan: Why the Tea Party’s Right to be Wary | BillMoyers.com 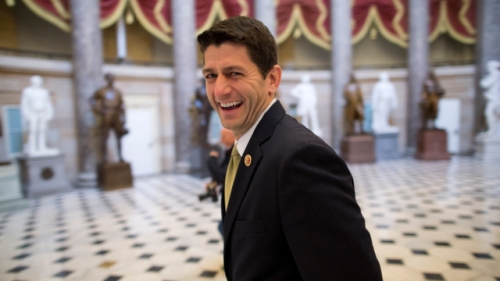 Only in a world where Cosmopolitan magazine can declare the Kardashians “America’s First Family” and the multi-billionaire loose cannon Donald Trump is perceived by millions as the potential steward of our nuclear arsenal could about-to-be Speaker of the House Paul Ryan be savaged as insufficiently right-wing.This is after all a man who made his bones in Congress and the Republican Party as an Ayn Rand-spouting, body building budget-buster slashing away at the body politic like a mad vivisectionist, as well as an anti-choice, pro-gun zealot who never met a government program he liked (except the military, whose swollen budget he would increase until we are all left naked living in a national security state).But the former vice presidential candidate is widely cited among many of his colleagues as a likable enough chap who is polite to his elders in the hierarchy of Congress, and this makes the more rabid bomb throwers seethe. To them, that chummy, self-enlightened pragmatism as well as his past embrace of immigration reform qualify him as a so-called RINO, a Republican in Name Only, a “squish.” Time makes ancient good uncouth, as the poem goes, and in the words of Ed Kilgore at Washington Monthly’s “Political Animal” blog, “Nowadays if you are guilty of having ever supported ‘amnesty’ your other heresies will be uncovered, however old they are. The other way to look at it, of course, is that the GOP continues to drift to the Right, making yesterday’s ideological heroes suspect.”The House Freedom Caucus, the fractious faction of radical right-wingers gerrymandered into a permanent demolition squad, successfully conspired to bring down House Speaker John Boehner and his designated successor Kevin McCarthy. They have for the moment agreed to support Paul Ryan’s speakership, but not with the unanimity that would constitute an official endorsement. Further, it seems that for their support to continue once he takes the job Ryan must pledge to curtail some of his powers and enable the insurgents to continue to wreak havoc on the day-to-day business of the House without fear of punishment by the grown-ups.There’s a paradox to all this. Despite his ideological kinship with the anti-government crowd, Paul Ryan is the embodiment of the troika of money, power, and politics that corrupts and controls the capital, the very thing the tea partiers detest. Ryan is “a creature of Washington,” Red State’s Erick Erickson wrote. “He worked on Capitol Hill, worked in a think tank, then went back as a congressman. He speaks Washingtonese with the best of them.”He’s a master at the insider cronyism that defines Washington today. Just look at Ryan’s choice as his new chief of staff: David Hoppe, the personification of the supreme K-Street lobbyist, his footprints stamped all over the tar pit of Washington patronage, his hands chapped from rubbing at the prospect of the big bucks corporations pay for government favors. A 29-year veteran staffer on Capitol Hill, he’s a poster child for the revolving door through which members of Congress and their staffs rotate in the endless cycling between public service and private lucre.In Hoppe’s case, the rush of air from the revolving door would jumpstart the windmill in a Dutch landscape painting. The indefatigable journalistic sleuth David Sirota went digging into federal records this week and reports that, “Hoppe has lobbied for such major financial industry interests as insurance giant Metlife, the National Venture Capital Association and Zurich Financial Services.”Hoppe also has scurried along the inner corridors and back rooms of government for the investment firm BlackRock. Imagine: this man will now be sitting right there beside the Speaker of the House after working for a company which, Sirota writes, “could be affected by efforts to change federal financial regulations and which could benefit from a recent proposal to shift military pension money into a federal savings plan managed in part by the Wall Street giant.”What’s more, Hoppe has lobbied for Cayman Finance, “whose business ‘promot[ing] the development of the Cayman Islands financial services industry’ could be affected by legislation to crack down on offshore tax havens.” The big tax avoiders must be licking their corporate chops.

Source: The Paradox of Paul Ryan: Why the Tea Party’s Right to be Wary | BillMoyers.com (This Pressed)