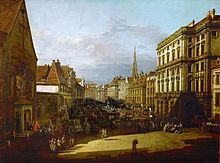 Neuer Markt in Vienna with Capuchin Church and Haus zur Mehlgrube on the right, painting by Bernardo Bellotto, 1760

The Piano Concerto No. 20 in D minor, K. 466, was written by Wolfgang Amadeus Mozart in 1785. The first performance took place at the Mehlgrube Casino in Vienna on February 11, 1785, with the composer as the soloist.[1]

A few days after the first performance, the composer’s father, Leopold, visiting in Vienna, wrote to his daughter Nannerl about her brother’s recent success: “[I heard] an excellent new piano concerto by Wolfgang, on which the copyist was still at work when we got there, and your brother didn’t even have time to play through the rondo because he had to oversee the copying operation.”[1]

It is written in the key of D minor. Other works by the composer in that key include the Fantasia K. 397 for piano, Requiem, a Kyrie, the aria “Der Hölle Rache kocht in meinem Herzen” from the opera The Magic Flute and parts of the opera Don Giovanni. It is the first of two piano concertos written in a minor key (No. 24 in C minor being the other).

The young Ludwig van Beethoven admired this concerto and kept it in his repertoire.[1] A bass run from the first movement appears for comic effect in Variation 22 of the Diabelli Variations. Daniel Barenboim contends that this concerto was Joseph Stalin‘s favorite piece of music.[2] Composers who wrote cadenzas for it include Beethoven (WoO 58), Charles-Valentin Alkan, Johannes Brahms (WoO 16), Johann Nepomuk Hummel, Ferruccio Busoni, and Clara Schumann.

The concerto is scored for solo piano, flute, two oboes, two bassoons, two horns, two trumpets, timpani and strings. As is typical with concertos, it is in three movements:

The first movement starts off the concerto in the dark tonic key of D minor with the strings restlessly but quietly building up to a full forte. The theme is quickly taken up by the piano soloist and developed throughout the long movement. A slightly brighter mood exists in the second theme, but it never becomes jubilant. The timpani further heighten the tension in the coda before the cadenza. The movement ends on a quiet note.

The ‘Romanze’ second movement is a five-part rondo (ABACA)[3] with a coda. The beginning features a solo piano playing the flamboyant and charming main B-flat major melody without accompaniment. This lyrical, passionate, tender and romantic melody, played at a relatively dainty tempo, paints a picture of peace and a sense of harmony between the piano and the orchestra, and has also inspired its title ‘Romanze’. Halfway through, the piece moves on to the second episode (part C), where the beautiful melody is replaced with a turbulent, agitated and ominous theme in the relative minor key of G minor, which greatly contrasts the peaceful mood at the starting of the movement. Finally, we are greeted once again with the aforeheard melody which returns as the movement is nearing the end. The piece ends with an ascending arpeggio that is light and delicate, gradually until it becomes a faint whisper.

The final movement, a rondo, begins with the solo piano rippling upward in the home key before the full orchestra replies with a furious section. (This piano “rippling” is known as the Mannheim Rocket and is a string of eighth notes (d-f-a-d-f) followed by a quarter note (a). A second melody is touched upon by the piano where the mood is still dark but strangely restless. A contrasting cheerful melody in F major ushers in not soon after, introduced by the orchestra before the solo piano rounds off the lively theme. A series of sharp piano chords snaps the bright melody and then begin passages in D minor on solo piano again, taken up by full orchestra. Several modulations of the second theme (in A minor and G minor) follow. Thereafter follows the same format as above, with a momentary pause for introducing the customary cadenza. After the cadenza, the mood clears considerably and the bright happy melody is taken up this time by the winds. The solo piano repeats the theme before a full orchestral passage develops the passage, thereby rounding up the concerto with a jubilant D major finish.

The second movement (minus the more tumultuous C part of the rondo) plays in the final scene and during the end credits of the 1984 movie Amadeus. The melody begins right before Antonio Salieri tells the priest sent to hear his confession that he is the patron saint of mediocrities. In the final shot of the film, Salieri announces, “Mediocrities everywhere, I absolve you.” Right before the screen fades to black, Mozart’s laugh is heard. At this point, the piano concerto picks up in volume, continuing through the end of the credits.

The first movement was also played in the ballet scene in Series 1 Episode 8 of the television series Mr. Robot.