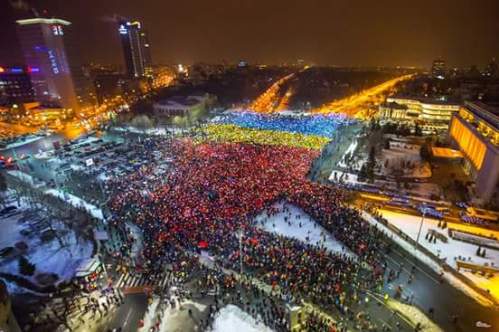 The branch of hope

The branch of hope

Thousands of protesters braved the cold to march in Romania’s main cities on Saturday, angered by government attempts to water down anti-corruption laws.

In the capital Bucharest, where a major rally is planned for Sunday, around 3,000 people gathered at the seat of government despite sub-zero temperatures.

“We are resisting, we aren’t going away” yelled the protesters, who are calling for the left-leaning Social Democrat government, which only took power in December, to stand down

Another 8,000 people took part in protests in the rest of the country, according to the national Agerpres news agency.

These included 3,000 in Timisoara, in the west, and around 2,500 at protests in towns of Cluj and Sibiu.

Saturday’s demonstrations, the 12th consecutive day of protests against the government, took place despite the administration backing down over a planned controversial decree which would have made abuse of power a crime punishable by jail only if the sums involved exceeded 200,000 lei (44,000 euros, $47,500).

The demonstrations, the largest since the ousting and summary execution of communist dictator Nicolae Ceausescu in 1989, have also continued despite the resignation on Thursday of justice minister Florin Iordache.

Romania joined the European Union in 2007 and Brussels has long taken Bucharest to task over slow progress dealing with corruption and organised crime.

The country has intensified the fight against corruption in recent years with the creation of a prosecutor attached to the DNA anti-corruption agency, which has become one of the most popular government agencies following the conviction of several ministers and senior officials.

Graft watchdog Transparency International ranked Romania below all but three of its fellow EU states in a January report based on public perception of the prevalence of corruption. Worldwide, the country ranked 57th.

A counter-demonstration in support of the government also took place in Bucharest on Saturday, but mustered only a few hundred people in front of the presidential palace.