by Anna Giaritelli | Jan 21, 2018, 12:01 AM
Share on TwitterShare on FacebookEmail this articleShare on LinkedInPrint this article

Department of Homeland Security officials are close to wrapping up the testing and evaluation phase for the eight border wall prototypes that were constructed in San Diego, Calif., two senior DHS officials confirmed Friday.

“The testing portion has been completed. Right now, the results of the information gathered in that test period are being looked at by engineers, Border Patrol, and many others, so we can look at what features of those designs are the best to do the job,” a Customs and Border Protection spokesman told the Washington Examiner.

The process started Nov. 26, and CBP, a DHS agency, estimated it would take 30 to 60 days, or some time around the end of January.

Contrary to some media reports that the government will pick one or two prototypes, CBP stated Friday that it plans to take elements from each prototype and then create a whole new barrier from what it learned through the testing and evaluation process.

The prototypes are being considered based on their ability to prevent people from climbing them, breaching them, or digging under them. They are also being studied for how they are able to deter or block traffic and how agents are able to operate around them.

“One of the things that is powerful, when you see the actual height compared to other designs,” the CBP spokesman said about the 30-foot models. “You have the other secondary wall that is 12 to 18 feet. People don’t realize how tall they are.”

The pathway forward for building hundreds, if not thousands, of miles of the Southwest border wall will depend on whether Congress funds the project.

DHS has begun adding to the barrier at the Rio Grande Valley in Texas where illegal immigration apprehensions were high in fiscal 2017, but the department cannot move on the $20 billion project without substantial funding from Washington, creating another hold-up for the Trump administration.

Tens of thousands of Romanians marched through heavy snow in Bucharest on Saturday in protest against proposed laws that critics say will make it harder to prosecute crime and high-level corruption.

An estimated 50,000 people marched towards parliament, blowing whistles, waving flags and chanting, “thieves”. Protesters briefly scuffled with riot police as they massed in the capital’s University Square, while thousands more demonstrated in cities across Romania. 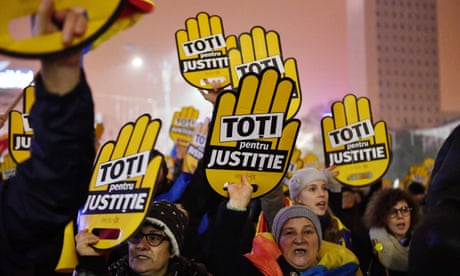 The left-wing government pushed through a judicial overhaul through parliament in December, despite criticism from the European Commission, the US state department, thousands of magistrates and the centrist president, Klaus Iohannis.

Critics say the bills would weaken judicial independence and they have been challenged in the constitutional court, where they await a ruling.

“I came out today because I have two little boys and they deserve a better life in this European country,” said Florentina Caval, 34. “I honestly don’t think we will manage to overturn the judicial bills, but we need to try.”

Diana Gradinaru, a 45-year-old economist, said the new legislation could result in “terrible thefts” by high-level officials, citing legislation that meant video and audio recordings could no longer be used as evidence in prosecutions. 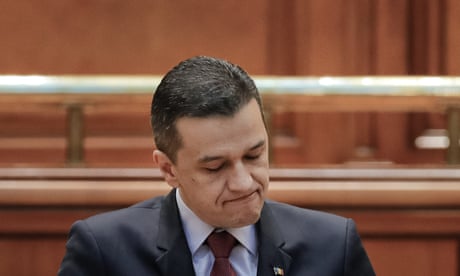 An attempt by the ruling Social Democrats to decriminalise several corruption offences at the start of 2017 triggered Romania’s largest street protests since the 1989 fall of communism.

Prime minister-designate Viorica Dancila supports revamping the judicial system. She is an ally of Liviu Dragnea, the Social Democrats chairman who can’t be premier due to a conviction for vote rigging.

Iohannis, who needs to sign off on the laws, on Friday wrote to the constitutional court, saying one amendment that would allow public officials to own businesses “diminished the standards of integrity” expected from public officials.

Transparency International ranks Romania among the EU’s most corrupt states.

… we have a small favour to ask. More people are reading the Guardian than ever but advertising revenues across the media are falling fast. And unlike many news organisations, we haven’t put up a paywall – we want to keep our journalism as open as we can. So you can see why we need to ask for your help. The Guardian’s independent, investigative journalism takes a lot of time, money and hard work to produce. But we do it because we believe our perspective matters – because it might well be your perspective, too.

I appreciate there not being a paywall: it is more democratic for the media to be available for all and not a commodity to be purchased by a few. I’m happy to make a contribution so others with less means still have access to information.Thomasine F-R.

If everyone who reads our reporting, who likes it, helps fund it, our future would be much more secure. For as little as $1, you can support the Guardian – and it only takes a minute. Thank you.

Via euronews: Thousands of Romanians turn out for Bucharest anti-corruption protest

Via euronews: Thousands of Romanians turn out for Bucharest anti-corruption protest

When it comes to fighting corruption, some are prepared to walk the extra mile.

One man marched 450 kilometres across Romania — attracting many supporters along the way — to attend an anti-graft demonstration in Bucharest.

Protesters are upset at government moves they say would put the justice system partially under political control and decriminalise some corruption offences.

“This is why people are in the streets, because from month-to-month we saw that politicians are still trying to demolish the rule of law in Romania,” Attila Biro, a journalist at RISE Project, told Euronews.

Some 50,000 people joined the demonstration in Romania’s capital, braving the elements, as thousands more demonstrated in cities across the ex-communist state.

“We want a free country, we want freedom and free justice in our country. It’s all about the future of our children,” said Halina, a protester at Saturday evening’s march.

Romania, which joined the EU just over a decade ago, is ranked one of the bloc’s most corrupt states by Transparency International.

Euronews’ raw reporting from the scene

All we can do…is keep breaking: Watch “Keep Breathing – Ingrid Michaelson” on YouTube