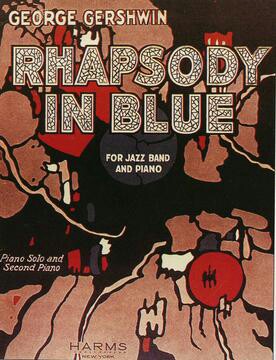 Rhapsody in Blue is a 1924 musical composition by American composer George Gershwin for solo piano and jazz band, which combines elements of classical music with jazz-influenced effects.

Cover of the original sheet music of the two-piano version of Rhapsody in Blue
Genre Orchestral jazz, solo piano
Composed 1924
Close
Commissioned by bandleader Paul Whiteman, the composition was orchestrated by Ferde Grofé several times, including the original 1924 scoring, “theater orchestra” setting published in 1926, and the symphony orchestra scoring published in 1942, though completed earlier. The piece received its premiere in the concert, An Experiment in Modern Music, which was held on February 12, 1924, in Aeolian Hall, New York, by Whiteman and his band with Gershwin playing the piano.

The editors of the Cambridge Music Handbooks opined that “The Rhapsody in Blue (1924) established Gershwin’s reputation as a serious composer and has since become one of the most popular of all American concert works.”

History
Commission
After the success of an experimental classical-jazz concert held with French-Canadian singer Eva Gauthier at Aeolian Hall (New York) on November 1, 1923, band leader Paul Whiteman decided to attempt something more ambitious. He asked Gershwin to contribute a concerto-like piece for an all-jazz concert he would give in Aeolian Hall in February 1924. Whiteman became interested in featuring such an extended composition by Gershwin in the concert after he had collaborated with Gershwin in the Scandals of 1922, impressed by the original performance of the one-act opera Blue Monday, which was nevertheless a commercial failure. Gershwin declined on the grounds that, as there would certainly be need for revisions to the score, he would not have enough time to compose the new piece.

Late on the evening of January 3, at the Ambassador Billiard Parlor at Broadway and 52nd Street in Manhattan, while George Gershwin and Buddy De Sylva were playing billiards, his brother Ira Gershwin was reading the January 4 edition of the New York Tribune. An article entitled “What Is American Music?” about the Whiteman concert caught his attention, in which the final paragraph claimed that “George Gershwin is at work on a jazz concerto, Irving Berlin is writing a syncopated tone poem, and Victor Herbert is working on an American suite.”

In a phone call to Whiteman next morning, Gershwin was told that Whiteman’s rival Vincent Lopez was planning to steal the idea of his experimental concert and there was no time to lose. Gershwin was finally persuaded to compose the piece.

Composition
Since there were only five weeks left, Gershwin hastily set about composing a piece, and on the train journey to Boston, the ideas of Rhapsody in Blue came to his mind. He told his first biographer Isaac Goldberg in 1931:

It was on the train, with its steely rhythms, its rattle-ty bang, that is so often so stimulating to a composer – I frequently hear music in the very heart of the noise…. And there I suddenly heard, and even saw on paper – the complete construction of the Rhapsody, from beginning to end. No new themes came to me, but I worked on the thematic material already in my mind and tried to conceive the composition as a whole. I heard it as a sort of musical kaleidoscope of America, of our vast melting pot, of our unduplicated national pep, of our metropolitan madness. By the time I reached Boston I had a definite plot of the piece, as distinguished from its actual substance.

Gershwin began his work on January 7 as dated on the original manuscript for two pianos. The piece was titled “American Rhapsody” during composition. The title Rhapsody in Blue was suggested by Ira Gershwin after his visit to a gallery exhibition of James McNeill Whistler paintings, which bear titles such as Nocturne in Black and Gold: The Falling Rocket and Arrangement in Grey and Black (better known as Whistler’s Mother). After a few weeks, Gershwin finished his composition and passed the score to Whiteman’s arranger Ferde Grofé, who orchestrated the piece, finishing it on February 4, only eight days before the premiere.

Premiere
Rhapsody in Blue premiered in an afternoon concert on Tuesday, February 12, 1924, held by Paul Whiteman and his band Palais Royal Orchestra, entitled An Experiment in Modern Music, which took place in Aeolian Hall in New York City. Many important and influential composers of the time such as John Philip Sousa and Sergei Rachmaninoff were present. The event has since become historic specifically because of its premiere of the Rhapsody.

The purpose of the experiment, as told by Whiteman in a pre-concert lecture in front of many classical music critics and highbrows, was “to be purely educational”. It would “at least provide a stepping stone which will make it very simple for the masses to understand, and therefore, enjoy symphony and opera”. The program was long, including 26 separate musical movements, divided into 2 parts and 11 sections, bearing titles such as “True form of jazz” and “Contrast: legitimate scoring vs. jazzing”. Gershwin’s latest composition was the second to last piece (before Elgar’s Pomp and Circumstance March No. 1). Many of the numbers sounded similar and the ventilation system in the concert hall was broken. People in the audience were losing their patience, until the clarinet glissando that opened Rhapsody in Blue was heard.

The Rhapsody was performed by Whiteman’s band, with an added section of string players, and George Gershwin on piano. Gershwin decided to keep his options open as to when Whiteman would bring in the orchestra and he did not write down one of the pages for solo piano, with only the words “Wait for nod” scrawled by Grofé on the band score. Gershwin improvised some of what he was playing, and he did not write out the piano part until after the performance, so it is unknown exactly how the original Rhapsody sounded.

The opening clarinet glissando came into being during rehearsal when; “… as a joke on Gershwin, [Ross] Gorman (Whiteman’s virtuoso clarinettist) played the opening measure with a noticeable glissando, adding what he considered a humorous touch to the passage. Reacting favourably to Gorman’s whimsy, Gershwin asked him to perform the opening measure that way at the concert and to add as much of a ‘wail’ as possible.”

Responses
By the end of 1927, Whiteman’s band had played the Rhapsody eighty-four times, and its recording sold a million copies. To get the whole piece onto two sides of a 12-inch record it had to be played at a faster speed than it would usually have in concert, which gave it a hurried feel and some rubato was lost. Whiteman later adopted the piece as his band’s theme song, and opened his radio programs with the slogan “Everything new but the Rhapsody in Blue.”

This composition shows extraordinary talent, as it shows a young composer with aims that go far beyond those of his ilk, struggling with a form of which he is far from being master…. In spite of all this, he has expressed himself in a significant and, on the whole, highly original form…. His first theme … is no mere dance-tune … it is an idea, or several ideas, correlated and combined in varying and contrasting rhythms that immediately intrigue the listener. The second theme is more after the manner of some of Mr. Gershwin’s colleagues. Tuttis are too long, cadenzas are too long, the peroration at the end loses a large measure of the wildness and magnificence it could easily have had if it were more broadly prepared, and, for all that, the audience was stirred and many a hardened concertgoer excited with the sensation of a new talent finding its voice…. There was tumultuous applause for Gershwin’s composition.
Another reviewer, Lawrence Gilman, a Richard Wagner specialist who later wrote a devastating review of Gershwin’s Porgy and Bess, commenting on the Rhapsody in the New York Tribune on February 13, 1924, said:

How trite, feeble and conventional the tunes are; how sentimental and vapid the harmonic treatment, under its disguise of fussy and futile counterpoint! … Weep over the lifelessness of the melody and harmony, so derivative, so stale, so inexpressive!
Some critics described the piece as formless, and claimed that Gershwin only glued his melodic segments together into one piece. Pitts Sanborn wrote that the music “runs off into empty passage-work and meaningless repetition”. In an article in Atlantic Monthly in 1955, Leonard Bernstein, who nevertheless admitted that he loved the piece, wrote:

The Rhapsody is not a composition at all. It’s a string of separate paragraphs stuck together. The themes are terrific, inspired, God-given. I don’t think there has been such an inspired melodist on this earth since Tchaikovsky. But if you want to speak of a composer, that’s another matter. Your Rhapsody in Blue is not a real composition in the sense that whatever happens in it must seem inevitable. You can cut parts of it without affecting the whole. You can remove any of these stuck-together sections and the piece still goes on as bravely as before. It can be a five-minute piece or a twelve-minute piece. And in fact, all these things are being done to it every day. And it’s still the Rhapsody in Blue.