The British Library, the Bibliothèque nationale de France and The Polonsky Foundation have teamed up to create two websites that will provide digital access to 800 medieval manuscripts. The websites will be launched next month.

It is part of ‘The Polonsky Foundation England and France Project,’ which began in 2016. The British Library and the Bibliothèque nationale de France are providing 400 manuscripts each from their collections, which were selected for their importance in relation to the history of French-English relationships in the Middle Ages. Produced between the 8th and the late 12th centuries, they cover a broad spectrum representing intellectual output during the early Middle Ages and the Romanesque era. Among them are a number of precious, lavishly illuminated examples, such as the Winchester Benedictional from around the year 1000, the Chartres Bible circa 1140 and the Canterbury Psalter made at the end of twelfth-century.

Laurence Engel, President of the Bibliothèque nationale de France, commented that “Two outstanding medieval collections have been brought together through this ambitious project funded by The Polonsky Foundation, the fruit of a commitment shared by the Bibliothèque nationale de France and the British Library to harness our scientific and technological expertise in placing invaluable treasures within everyone’s reach. This is an example of common heritage that we are sharing together.”

“We are delighted to be working with our colleagues at the Bibliothèque nationale de France on this hugely exciting collaboration,” added Roly Keating, Chief Executive of the British Library. “It will bring together manuscript treasures from a time when the cultural, political and religious interchange between Britain and France was unfolding at many levels. The illuminated manuscripts that our respective institutions hold are remarkable survivals from that period.”

Some of these manuscripts will be featured at upcoming ‘Anglo-Saxon Kingdoms : Art, Word, War’ exhibition that begins later this month at the British Library. A book is also being published simultaneously by both libraries to showcase a selection of the illuminated manuscripts – Medieval illumination, Manuscript Art in England and France 700-1200, by Kathleen Doyle and Charlotte Denoël.

The two websites will work in a complimentary fashion. The first, France-England: medieval manuscripts between 700 and 1200, has been created by the Bibliothèque nationale de France based on the Gallica marque blanche infrastructure, using the IIIF standard and Mirador viewer to make the images held by the different institutions interoperable and enable them to be compared side-by-side within the same digital library or annotated. The second website, Medieval England and France, 700-1200, is aimed at a wider public audience, and has been developed by the British Library to showcase a selection of manuscripts as well as articles, essays and video clips.

Dr Leonard S. Polonsky and Marc Polonsky of The Polonsky Foundation said in a statement: “This project brings together riches of the Bibliothèque nationale de France and the British Library, and makes them available to researchers and the wider public in innovative and attractive ways. Our Foundation is privileged to support this collaboration, which continues the cultural exchange and profound mutual influence that characterise the history of these two nations over many centuries.”

Look for these two sites to begin in November:

With dozens of adaptations of the medieval tale of Robin Hood in film, could this latest one offer viewers something new? More importantly, is it any good?

The Middle Ages as seen through National Geographic

Domesday Book was completed much later than 1087, historian finds

Medieval St Paul’s Cathedral of London to be rebuilt virtually

When the Great Fire of London destroyed much of th…

People were healthier in the Early Middle Ages than in later centuries, study finds

The Early Middle Ages, from the 5th to the 10th ce…

Endowed with Manly Courage: Medieval Perceptions of Women in Combat

This study argues, first, that women did have the capacity in the Middle Ages to engage in combat and, second, that the men who wrote about female warriors, both in historical chronicles and in romance, viewed the women with nuanc…

With dozens of adaptations of the medieval tale of…

In my next few columns, I’m going to explore the w…

Domesday Book was completed much later than 1087, historian finds

Symes makes the case in the journal Speculum that …

Medieval St Paul’s Cathedral of London to be rebuilt virtually

When the Great Fire of London destroyed much of th…

From Roman Gold, to Merovingian “Pale Gold,” to Medieval Silver

Paper by Michael McCormick, given at the Climate, …

Why did the Byzantines write History?

Our desires and expectations for good history do n…

What was the perception and conception of homicide…

Portolan Charts from the Late Thirteenth Century to 1500

From the earliest extant copies, probably a little…

New Medieval Books: From the 8th to the 21st century

Four books and one special issue of a magazine for you to check out! From Cambridge to India, and books on crusades, Vikings and medieval inter-religious dialogue.

Working in the Middle Ages: The Medieval Clothier

Which translation of Romance of the Three Kingdoms should I read?

For the want of Emma: What if the Vikings had won the Battle of Stamford Bridge?

For anyone who visits Örebro, it is hard to miss its castle – an ancient-looking fortress made of weathered grey stones that stands on an islet in the middle of the city centre.

How do you operate a business when you can’t read …

Uppsala Slott: 5 Things You Ought to Know About One of Sweden’s Greatest Castles

This strategic location not only makes the castle …

The Weird, the Wonderful, and the Macabre in the Cathedral of Narbonne

Narbonne is one of those European cities with evid… 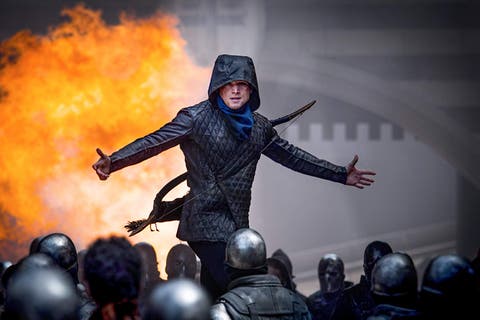 With dozens of adaptations of the medieval tale of Robin Hood in film, could this latest one offer viewers something new? More importantly, is it any good?

Reviewing it through the medievalist perspective, the first thing I noticed was that this was not set in the Middle Ages, but more a blend of ‘sometime in the past’ with a little steampunk. The filmmakers even deliberately state they won’t be giving us a supposed date to these events, or even that it is history.

What we do get is arrows that shoot like bullets – the machine gun crossbow is a nice touch – and a city of Nottingham which has flames spewing out of every second building – because of the mines, I guess. Some viewers will view it as ridiculous, but I rather liked this take on the story – giving us something of a new setting to play with.

The story moves quickly as Robin and Marian meet at the beginning, and falling very much in love. All is happy until Robin gets a letter – he’s been drafted to fight in the war! We next see him in ‘Arabia’ fighting in the crusades, where you get scenes seemingly lifted from World War Two films. It’s not too long before we return back to England and Nottingham, where the city is now under the crushing grip of its Sheriff.

As all Robin Hood stories go, the tale involves one where the rich and powerful are taking from the poor and weak, and our hero being the one who will make things right. The main baddie in this case is the Sheriff of Nottingham, played by Ben Mendelsohn, who seems to be reviving his Orson Krennic character from Rogue One: A Star Wars Story. The Church also is presented as the major villains as well, but there is a lot of corruption to go around.

Taron Egerton gets the starring role of Robin of Loxley, but this action hero doesn’t have the charm that he gives off in the Kingsman films. Jamie Foxx is our ‘John’ who gets to be Robin’s trainer and mentor, and we also get our Friar Tucks and Will Scarletts as well. Marian, played by Eve Hewson, is given a lot of screen time here, and delivers the best performance of the cast.

The Middle Ages as seen through National Geographic

This is very much an action film, with lots of arrows being shot, and our Robin doing his best to fight and escape from the legions of armoured henchmen. The fight and chase scenes predictable, but passable. It offers up a lot of noise, but nothing memorable.

I think most moviegoers will say this is an okay film, while more seasoned reviewers can pick out lots of problems with weak dialogue and an overly serious plot. As for insights gleaned by the medievalist reviewer, it is best to say that the movie loosely borrows some medieval elements, but it certainly does not come across as something set in the Middle Ages. At least I hope the filmmakers did not think this was what they thought the medieval period might have looked like!