(A straight to the point, deep and noble analysis of the most eloquent musician of all times BACH)

The Art of Fugue 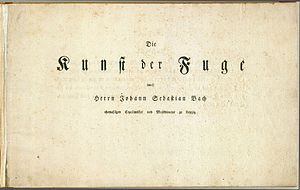 Title page of the first edition, 1751

The Art of Fugue (or The Art of the Fugue; German: Die Kunst der Fuge), BWV 1080, is an incomplete musical work of unspecified instrumentation by Johann Sebastian Bach (1685–1750). Written in the last decade of his life, The Art of Fugue is the culmination of Bach’s experimentation with monothematic instrumental works.

This work consists of 14 fugues and 4 canons in D minor, each using some variation of a single principal subject, and generally ordered to increase in complexity. “The governing idea of the work”, as put by Bach specialist Christoph Wolff, “was an exploration in depth of the contrapuntalpossibilities inherent in a single musical subject.”[1] The word “contrapunctus” is often used for each fugue.

The earliest extant source of the work is an autograph manuscript[2] of the early 1740s, containing 12 fugues and 2 canons. This autograph is typically referred to by its call number of P200 in the Berlin State Library. Three manuscripts for pieces that would appear in the revised edition were bundled with P200 at some point before its acquisition by the library.

The revised version was published in May 1751, slightly less than a year after Bach’s death. In addition to changes in the order, notation, and material of pieces which appeared in the autograph, it contained 2 new fugues, 2 new canons, and 3 pieces of ostensibly spurious inclusion. A second edition was published in 1752, but differed only in its addition of a preface by Friedrich Wilhelm Marpurg.

In spite of its revisions, the printed edition of 1751 contained a number of glaring editorial errors. The majority of these may be attributed to Bach’s relatively sudden death in the midst of publication. Three pieces were included that do not appear to have been part of Bach’s intended order: an unrevised (and thus redundant) version of the second double fugue, Contrapunctus X; a two-keyboard arrangement[3] of the first mirror fugue, Contrapunctus XIII; and a chorale harmonization “Vor deinen Thron tret ich hiermit” (“Herewith I come before Thy Throne”), derived from BWV 668a, and noted in the introduction to the edition as a recompense for the work’s incompleteness, having purportedly been dictated by Bach on his deathbed.

The anomalous character of the published order and the Unfinished Fugue have engendered a wide variety of theories which attempt to restore the work to the state originally intended by Bach.

The Art of Fugue is based on a single subject ( play on piano (help·info) or play on organ (help·info)):

which each canon and fugue employs in some variation.

The work divides into seven groups, according to each piece’s prevailing contrapuntal device; in both editions, these groups and their respective components are generally ordered to increase in complexity. In the order in which they occur in the printed edition of 1751 (without the aforementioned works of spurious inclusion), the groups, and their components are as follows.

Counter-fugues, in which the subject is used simultaneously in regular, inverted, augmented, and diminished forms:

Mirror fugues, in which a piece is notated once and then with voices and counterpoint completely inverted, without violating contrapuntal rules or musicality:

Canons, labeled by interval and technique:

Both editions of the Art of Fugue are written in open score, where each voice is written on its own staff. This has led some to conclude[6] that the Art of Fugue was intended as an intellectual exercise, meant to be studied more than heard. The renowned keyboardist and musicologist