María José de Pablo Fernández,[1] known professionally as Cote de Pablo (born November 12, 1979), is a Chilean-American actress and singer. Born in Santiago, Chile, at the age of ten she moved to the United States, where she studied acting.

De Pablo co-hosted episodes of the Latin-American talk show Control with former Entertainment Tonight host, Carlos Ponce, at the age of 15 before attending Carnegie Mellon University to study music and theatre. After appearing in a number of television roles, she was cast to portray main character Ziva David in the CBS television series NCIS in 2005 and won an ALMA Award for the role in 2011.

She performed a portion of Tom Waits‘ song “Temptation” for a 2008 episode of NCIS. Outside the series, she has sung on Roberto Pitre’s Vivo En Vida CD.[2]

De Pablo was born in Santiago, Chile, to Francisco de Pablo and María Olga Fernández.[2][3] She has a younger sister,[4] Andrea, and a brother, Francisco, who works as a disc jockey.[5] When de Pablo was 10 years old, her mother, María Olga Fernández, took a job in Miami, Florida at a Spanish-language television network. While there, de Pablo attended Arvida Middle School and New World School of the Arts, where she studied musical theatre.
In the fifth grade, she found many people could not pronounce her first
name of “María José”, so she asked them to call her “Coté”, a common
Chilean nickname for María José.[6] De Pablo attended Carnegie Mellon University in Pittsburgh, Pennsylvania, where she studied music and theater and appeared in several plays, including And the World Goes ‘Round, The House of Bernarda Alba, Indiscretions, The Fantasticks, and A Little Night Music. She graduated in 2000 with a Bachelor of Fine Arts in Musical Theater.[7] 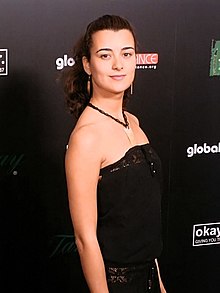 De Pablo began working in the entertainment industry at age 15, when she hosted some episodes of the talk show Control (1994–95) on Univision, alongside former Entertainment Tonight host Carlos Ponce.[8]

After graduation, she moved to New York City to find work as an actress, working as a waitress in an Indian restaurant in Manhattan and an Italian eatery in Brooklyn to support herself. She picked up parts in the New York City Public Theater, on the TV show All My Children, and in commercials. De Pablo played the role of Marguerite Cisneros in The Jury (broadcast on the Fox Network). The show was short-lived, screening only 10 one-hour episodes. In 2005, De Pablo was about to make her Broadway debut in The Mambo Kings[9] as Dolores Fuentes, but the show closed after a short trial run in San Francisco.[4]

De Pablo is primarily known for her portrayal of Ziva David, an Israeli Mossad officer turned NCIS agent, in the police procedural drama NCIS. She had submitted a videotape audition while waiting for The Mambo Kings to move forward and was asked to fly to Los Angeles for a screen test two days after it was canceled.[4][10] Network executives arranged for her to act alongside series regular Michael Weatherly
to test for chemistry during her second audition; he went off script by
brushing her hair back and commenting, “You remind me of Salma Hayek“. De Pablo’s response to Weatherly was to stay in character and she “dismissed him completely”. Afterward, producer Donald Bellisario met with her as she was waiting for a cab to take her back to the airport, telling her she had landed the part.[10][11]

De
Pablo described the character as “someone completely different from
anyone else on the show because she’s been around men all her life;
she’s used to men of authority. She’s not afraid of men.”[12]

On July 10, 2013, it was reported by CBS that de Pablo would be leaving NCIS
for undisclosed reasons, although she remained long enough to conclude
her character Ziva David’s storyline at the beginning of season 11.[14] De Pablo later told Cindy Elavsky that Ziva could come back because she did not die.[15]
However, in the season 13 finale of the series, it was stated that her
character had apparently died in an explosion in Israel.[16] Three years later in 2019, season 16 episode ‘She’,
revealed that Ziva is alive and has gone into hiding off-screen. De
Pablo made a surprise unannounced return to the show in the last scene
of the season 16 finale, which aired on May 21, 2019, in which Ziva
arrives at Gibbs’ basement to warn him that his life is in danger.
Producers confirmed that de Pablo would appear in the first two episodes
of the show’s 17th season as part of her storyline.

In January 2014, de Pablo was announced to have been cast in the film The 33, about the 2010 Copiapó mining accident, as the wife of one of the miners.[17] She was also cast in the 2015 CBS miniseries, titled The Dovekeepers, based on the Alice Hoffman novel.[18] In March 2016, Deadline Hollywood reported de Pablo is slated to return to series television as Laura Kale in Syfy‘s thriller-drama, Prototype, pending negotiations.[19] In April 2016, TVLine columnist Matt Mitovich confirmed de Pablo’s return to series television.[20] The show was to feature “three unlikely colleagues—two of them played by de Pablo and Jack Davenport—who
inadvertently stumble upon an invention that challenges the very nature
of quantum physics—a discovery which in turn puts their lives in grave
danger.”[21] In August 2016, Deadline reported that Syfy passed on the show.

On August 28, 2018 Deadline announced that de Pablo and former NCIS castmate, Michael Weatherly, would be the executive producers of the upcoming CBS detective drama MIA, written by Shepard Boucher.[22]

De Pablo performed a portion of Tom Waits’ song “Temptation” on the NCIS episode “Last Man Standing“, which first aired in the U.S. on September 23, 2008. Her full performance of the song, including some lyrics in French, appears for the first time on NCIS: The Official TV Soundtrack, which was released on February 10, 2009.

She is also the singer in Roberto Pitre’s Vivo en vida where she sings “Samba in Prelude” and “Cry Me a River“.[23]

De Pablo was in a long-term relationship with actor Diego Serrano,[25] but they were reported to have separated in June 2015.[26]