Posted in ARTISTS AND ARTS - Music

Posted in ARTISTS AND ARTS - Music

QUOTE: SECRECY IS THE KEYSTONE TO ALL TYRANNY (ROBERT A. HEINLEIN)

QUOTE: SECRECY IS THE KEYSTONE TO ALL TYRANNY (ROBERT A. HEINLEIN)

Tagged QUOTE: SECRECY IS THE KEYSTONE TO ALL TYRANNY (ROBERT A. HEINLEIN)

Watch “Dmitri Shostakovich – Romance (from The Gadfly)” on YouTube

“Shostakovich” redirects here. For the conductor and son of Dmitri Shostakovich, see Maxim Shostakovich.
This name uses Eastern Slavic naming customs; the patronymic is Dmitriyevich and the family name is Shostakovich. 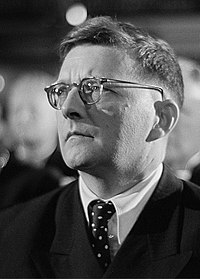 A polystylist, Shostakovich developed a hybrid voice, combining a variety of different musical techniques into his works. His music is characterized by sharp contrasts, elements of the grotesque, and ambivalent tonality; the composer was also heavily influenced by the neo-classical style pioneered by Igor Stravinsky, and (especially in his symphonies) by the late Romanticism of Gustav Mahler.

Shostakovich’s orchestral works include 15 symphonies and six concerti. His chamber output includes 15 string quartets, a piano quintet, two piano trios, and two pieces for string octet. His solo piano works include two sonatas, an early set of preludes, and a later set of 24 preludes and fugues. Other works include three operas, several song cycles, ballets, and a substantial quantity of film music; especially well known is The Second Waltz, Op. 99, music to the film The First Echelon (1955–1956),[2] as well as the suites of music composed for The Gadfly.

Birthplace of Shostakovich (now School No. 267). Commemorative plaque at left

Born at Podolskaya Street in Saint Petersburg, Russia, Shostakovich was the second of three children of Dmitri Boleslavovich Shostakovich and Sofiya Vasilievna Kokoulina. Shostakovich’s paternal grandfather, originally surnamed Szostakowicz, was of Polish Roman Catholic descent (his family roots trace to the region of the town of Vileyka in today’s Belarus), but his immediate forebears came from Siberia.[3] A Polish revolutionary in the January Uprising of 1863–4, Bolesław Szostakowicz would be exiled to Narym (near Tomsk) in 1866 in the crackdown that followed Dmitri Karakozov‘s assassination attempt on Tsar Alexander II.[4] When his term of exile ended, Szostakowicz decided to remain in Siberia. He eventually became a successful banker in Irkutskand raised a large family. His son Dmitri Boleslavovich Shostakovich, the composer’s father, was born in exile in Narim in 1875 and studied physics and mathematics in Saint Petersburg University, graduating in 1899. He then went to work as an engineer under Dmitri Mendeleev at the Bureau of Weights and Measures in Saint Petersburg. In 1903 he married another Siberian transplant to the capital, Sofiya Vasilievna Kokoulina, one of six children born to a Russian Siberian native.[4]

Their son, Dmitri Dmitriyevich Shostakovich, displayed significant musical talent after he began piano lessons with his mother at the age of nine. On several occasions he displayed a remarkable ability to remember what his mother had played at the previous lesson, and would get “caught in the act” of playing the previous lesson’s music while pretending to read different music placed in front of him.[5] In 1918 he wrote a funeral march in memory of two leaders of the Kadet party, murdered by Bolshevik sailors.[6]

In 1919, at the age of 13, he was admitted to the Petrograd Conservatory, then headed by Alexander Glazunov, who monitored Shostakovich’s progress closely and promoted him.[7] Shostakovich studied piano with Leonid Nikolayevafter a year in the class of Elena Rozanova, composition with Maximilian Steinberg, and counterpoint and fugue with Nikolay Sokolov, with whom he became friends.[8] Shostakovich also attended Alexander Ossovsky‘s music history classes.[9] Steinberg tried to guide Shostakovich on the path of the great Russian composers, but was disappointed to see him ‘wasting’ his talent and imitating Igor Stravinskyand Sergei Prokofiev. Shostakovich also suffered for his perceived lack of political zeal, and initially failed his exam in Marxist methodology in 1926. His first major musical achievement was the First Symphony (premiered 1926), written as his graduation piece at the age of 19. This work brought him to the attention of Mikhail Tukhachevsky, who helped Shostakovich find accommodation and work in Moscow, and sent a driver around in “a very stylish automobile” to take him to a concert.[10]

After graduation, Shostakovich initially embarked on a dual career as concert pianist and composer, but his dry style of playing was often unappreciated (his American biographer, Laurel Fay, comments on his “emotional restraint” and “riveting rhythmic drive”). He nevertheless won an “honorable mention” at the First International Chopin Piano Competition in Warsaw in 1927. He attributed the disappointment at the competition to suffering from appendicitis and the jury being all-Polish. He had his appendix removed in April 1927.[11]After the competition Shostakovich met the conductor Bruno Walter, who was so impressed by the composer’s First Symphony that he conducted it at its Berlin premiere later that year. Leopold Stokowski was equally impressed and gave the work its U.S. premiere the following year in Philadelphia and also made the work’s first recording.[citation needed]

Shostakovich concentrated on composition thereafter and soon limited his performances primarily to those of his own works. In 1927 he wrote his Second Symphony (subtitled To October), a patriotic piece with a great pro-Soviet choral finale. Owing to its experimental nature, as with the subsequent Third Symphony, it was not critically acclaimed with the enthusiasm given to the First.[citation needed]

END_OF_DOCUMENT_TOKEN_TO_BE_REPLACED

Tagged Dmitri Shostakovich - Romance (from The Gadfly)" on YouTube