Your efforts on the domestic front have certainly paid off, Taurus. Your home is looking wonderful. Everyone who enters says so. Some unexpected visitors may stop by for a quick hello and wind up staying for dinner. You are a natural, gracious host, not to mention a great cook. Who can blame your guests for wanting to stay?: https://play.google.com/store/apps/details?id=com.tfd.mobile.TfdSearch

Pre-Lenten activities are especially festive in Cologne, Germany. The celebration begins officially on the 11th day of the 11th month at 11:11 p.m., and the festival calendar is filled with 300 costume balls and performances of original songs and humorous speeches. These events lead up to the final “crazy days” just before Ash Wednesday, when the Lord Mayor of Cologne receives the Triumvirate of Carnival—Prince Carnival, the Cologne Virgin (played by a man), and the Cologne Peasant. The prince gets the keys to the city and rules the city until Carnival ends. More…: https://play.google.com/store/apps/details?id=com.tfd.mobile.TfdSearch

Jaspers was a German philosopher and psychopathologist often identified as an exponent of existentialism, although he rejected this classification. In his magnum opus, Philosophy, he argued that the aim of philosophy is practical and that its purpose is the fulfillment of human existence. He believed illumination is achieved through the experience of “limit situations” like conflict, guilt, and suffering, which define the human condition. What forced him to give up his teaching career? More…: https://play.google.com/store/apps/details?id=com.tfd.mobile.TfdSearch

This Day in History: Battle of the Alamo Begins (1836)

This Day in History:
Battle of the Alamo Begins (1836)

In the 1835 Texas Revolution, the predominantly American settlers of Texas sought independence from the Mexican government. In December, they took the Alamo, an old chapel in San Antonio. When Mexican forces arrived in February, the Texians were outnumbered and unprepared to withstand the 13-day siege. Nearly all of them were killed. The loss became a rallying point for Texians, who went on to win the war. What short-lived independent nation did they establish that year? More…: https://play.google.com/store/apps/details?id=com.tfd.mobile.TfdSearch

Quote of the Day: Gilbert Chesterton

Quote of the Day:
Gilbert Chesterton

Article of the Day: Pulp Magazines

Article of the Day:
Pulp Magazines

Pulp magazines were popular, inexpensive fiction magazines published from the late 19th century through the 1950s, primarily in the US. Printed on cheap paper with ragged, untrimmed edges, “pulps” were cheaper than books or standard magazines. While many respected, now-famous authors wrote for pulps, the magazines were known for their lurid, exploitative stories and sensational cover art, often featuring scantily-clad women. What famous masked hero made his rapier-toting debut in pulp magazines? More…: https://play.google.com/store/apps/details?id=com.tfd.mobile.TfdSearch

Idiom of the Day: hand-to-mouth

Idiom of the Day:
hand-to-mouth

Having, providing, or characterized by the bare minimum of money, food, or resources to survive, with little or nothing else to spare. Watch the video…: https://play.google.com/store/apps/details?id=com.tfd.mobile.TfdSearch

Word of the Day: scoundrel

Word of the Day:
scoundrel

Definition: (noun) A wicked or evil person; someone who does evil deliberately.

Usage: I am afraid to leave you here with these devilish scoundrels.: https://play.google.com/store/apps/details?id=com.tfd.mobile.TfdSearch

Albrecht Dürer (/ˈdjʊərər/;[1] German: [ˈʔalbʁɛçt ˈdyːʁɐ];[2][3][1] 21 May 1471 – 6 April 1528),[4] sometimes spelt in English as Durer or Duerer, without umlaut, was a German painter, printmaker, and theorist of the German Renaissance. Born in Nuremberg, Dürer established his reputation and influence across Europe when he was in his twenties due to his high-quality woodcut prints. He was in communication with the major Italian artists of his time, including Raphael, Giovanni Bellini and Leonardo da Vinci, and from 1512 he was patronized by Emperor Maximilian I. Dürer is commemorated by both the Lutheran and Episcopal Churches. 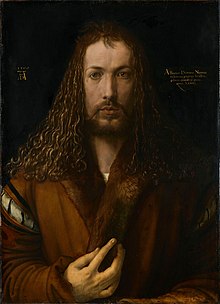 Dürer’s vast body of work includes engravings, his preferred technique in his later prints, altarpieces, portraits and self-portraits, watercolours and books. The woodcuts, such as the Apocalypse series (1498), are more Gothic than the rest of his work. His well-known engravings include the Knight, Death and the Devil (1513), Saint Jerome in his Study (1514) and Melencolia I (1514), which has been the subject of extensive analysis and interpretation. His watercolours also mark him as one of the first European landscape artists, while his ambitious woodcuts revolutionized the potential of that medium.

Dürer’s introduction of classical motifs into Northern art, through his knowledge of Italian artists and German humanists, has secured his reputation as one of the most important figures of the Northern Renaissance. This is reinforced by his theoretical treatises, which involve principles of mathematics, perspective, and ideal proportions.

Albrecht Dürer has been credited with inventing the basic principle of ray tracing, a technique used in modern computer graphics.[5] 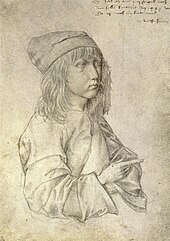 Self-portrait silverpointdrawing by the thirteen-year-old Dürer, 1484

Dürer was born on 21 May 1471, third child and second son of his parents, who had at least fourteen and possibly as many as eighteen children. His father, Albrecht Dürer the Elder (originally Albrecht Ajtósi), was a successful goldsmith who in 1455 had moved to Nuremberg from Ajtós [hu; fr], near Gyula in Hungary.[6] One of Albrecht’s brothers, Hans Dürer, was also a painter and trained under him. Another of Albrecht’s brothers, Endres Dürer, took over their father’s business and was a master goldsmith.[7] The German name “Dürer” is a translation from the Hungarian, “Ajtósi”.[6] Initially, it was “Türer”, meaning doormaker, which is “ajtós” in Hungarian (from “ajtó”, meaning door). A door is featured in the coat-of-arms the family acquired. Albrecht Dürer the Younger later changed “Türer”, his father’s diction of the family’s surname, to “Dürer”, to adapt to the local Nuremberg dialect. Dürer the Elder married Barbara Holper, daughter of his master when he himself qualified as a master in 1467.[8] 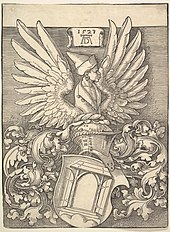 Woodcut by Dürer of his coat of arms, which featured a door as a pun on his name, as well as the winged bust of a Moor

Dürer’s godfather was Anton Koberger, who left goldsmithing to become a printer and publisher in the year of Dürer’s birth, and became the most successful publisher in Germany, eventually owning twenty-four printing-presses and built a number of offices in Germany and abroad. Koberger’s most famous publication was the Nuremberg Chronicle, published in 1493 in German and Latin editions. It contained an unprecedented 1,809 woodcutillustrations (albeit with many repeated uses of the same block) by the Wolgemut workshop. Dürer may have worked on some of these, as the work on the project began while he was with Wolgemut.[9]

Because Dürer left autobiographical writings and became very famous by his mid-twenties, his life is well documented by several sources. After a few years of school, Dürer started to learn the basics of goldsmithing and drawing from his father. Though his father wanted him to continue his training as a goldsmith, he showed such a precocious talent in drawing that he started as an apprentice to Michael Wolgemut at the age of fifteen in 1486. A self-portrait, a drawing in silverpoint, is dated 1484 (Albertina, Vienna) “when I was a child”, as his later inscription says. Wolgemut was the leading artist in Nuremberg at the time, with a large workshop producing a variety of works of art, in particular woodcuts for books. Nuremberg was then an important and prosperous city, a centre for publishing and many luxury trades. It had strong links with Italy, especially Venice, a relatively short distance across the Alps.[9] 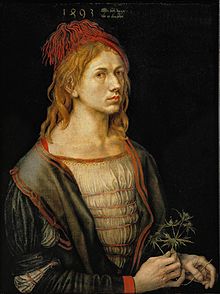 After completing his apprenticeship, Dürer followed the common German custom of taking Wanderjahre—in effect gap years—in which the apprentice learned skills from artists in other areas; Dürer was to spend about four years away. He left in 1490, possibly to work under Martin Schongauer, the leading engraver of Northern Europe, but who died shortly before Dürer’s arrival at Colmar in 1492. It is unclear where Dürer travelled in the intervening period, though it is likely that he went to Frankfurt and the Netherlands. In Colmar, Dürer was welcomed by Schongauer’s brothers, the goldsmiths Caspar and Paul and the painter Ludwig. In 1493 Dürer went to Strasbourg, where he would have experienced the sculpture of Nikolaus Gerhaert. Dürer’s first painted self-portrait (now in the Louvre) was painted at this time, probably to be sent back to his fiancée in Nuremberg.[9]

In early 1492 Dürer travelled to Baselto stay with another brother of Martin Schongauer, the goldsmith Georg.[10]Very soon after his return to Nuremberg, on 7 July 1494, at the age of 23, Dürer was married to Agnes Frey following an arrangement made during his absence. Agnes was the daughter of a prominent brass worker (and amateur harpist) in the city. However, no children resulted from the marriage, and with Albrecht the Dürer name died out. The marriage between Agnes and Albrecht was not a generally happy one, as indicated by the letters of Dürer in which he quipped to Willibald Pirckheimer in an extremely rough tone about his wife. He called her an “old crow” and made other vulgar remarks. Pirckheimer also made no secret of his antipathy towards Agnes, describing her as a miserly shrew with a bitter tongue, who helped cause Dürer’s death at a young age.[11] One author speculates that Albrecht was bisexual, if not homosexual, due to several of his works containing themes of homosexual desire, as well as the intimate nature of his correspondence with certain very close male friends.[12] 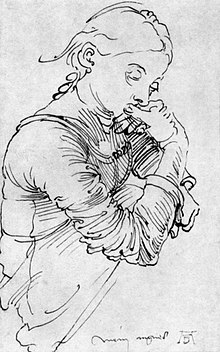 Within three months of his marriage, Dürer left for Italy, alone, perhaps stimulated by an outbreak of plague in Nuremberg. He made watercolour sketches as he traveled over the Alps. Some have survived and others may be deduced from accurate landscapes of real places in his later work, for example his engraving Nemesis.

In Italy, he went to Venice to study its more advanced artistic world.[13]Through Wolgemut’s tutelage, Dürer had learned how to make prints in drypoint and design woodcuts in the German style, based on the works of Martin Schongauer and the Housebook Master.[13] He also would have had access to some Italian works in Germany, but the two visits he made to Italy had an enormous influence on him. He wrote that Giovanni Bellini was the oldest and still the best of the artists in Venice. His drawings and engravings show the influence of others, notably Antonio Pollaiuolo, with his interest in the proportions of the body; Lorenzo di Credi; and Andrea Mantegna, whose work he produced copies of while training.[14] Dürer probably also visited Padua and Mantua on this trip.[15]

Just a thought: Happiness in one’s life is a reward not a right

Just a thought: Happiness in one’s life is a reward not a right

Posted in QUOTATION, Quote of the Day

Tagged Just a thought: Happiness in one's life is a reward not a right

Grasses in a cold winter night by the frozen lake

Grasses in a cold winter night by the frozen lake

Tagged Grasses in a cold winter night by the frozen lake