Must read: Ebola in Liberia: According to Dr. Kwan Kew Lai’s Blog 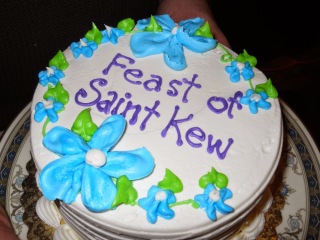 Today is the Feast of St. Kew, a little known Welsh saint, probably of the fifth century. She was the sister of a hermit called Docco who founded a monastery at or near the village of St. Kew which is now in Cornwall, England. Nothing much is known about her except that she was able to cause some wild boars to obey her, this ability caught the attention of her said brother who condescended to finally speak to her. Why they were not on speaking terms to begin with was a mystery.What is in a name? Kew is my given name. It would be unheard of to have a saint with my name especially someone from Asia. My daughter, Cara, was told by her Confraternity Christian Development (CCD) teacher that everyone has a saint who bears his or her name. She searched in vain for a saint with her name.

via Ebola in Liberia.

***featured on by NPR: The Ebola Diaries: Trying To Heal Patients You Can’t Touch http://n.pr/1EaPxUw

Since 1920, a group of hardy swimmers has celebrated New Year’s Day by plunging into the frigid waters of Vancouver’s English Bay. The custom has spread to the US, where chapters of the American Polar Bear Club have established themselves in a number of states known for their cold winter weather. In Sheboygan, Wisconsin, more than 300 daring swimmers brave the ice floes of Lake Michigan to take their New Year’s Day swim. The Sheboygan event has gradually expanded into a day-long festival, with a brat-fry, a costume contest, and live entertainment. More… Discuss

this day in the yesteryear: Sergei Eisenstein’s Battleship Potemkin Debuts in US (1926)

A dramatised account of the mutiny aboard the Russian battleship Potemkin that occurred in 1905, when its crew rebelled against their officers from the Tsarist regime. Directed by Sergei Eisenstein, Battleship Potemkin is regarded as one of the most influential propaganda films of all time and ranks highly on many best film lists.

Posted in Educational, FILM, IN THE SPOTLIGHT, MEMORIES, MY TAKE ON THINGS, ONE OF MY FAVORITE THINGS, PEOPLE AND PLACES HISTORY, GEOGRAPHY, Uncategorized

Leigh was “discovered” by actress Norma Shearer, whose late husband, Irving Thalberg, had been a senior executive at Metro-Goldwyn-Mayer (MGM). Though inexperienced, Leigh secured a contract with MGM, left college—where she had been studying music and psychology—and went on to appear in dozens of films. She is perhaps best known for her performance in Alfred Hitchcock’s 1960 film Psycho, which earned her a Golden Globe and an Oscar nomination. What famous actress is Leigh’s daughter? More… Discuss

Groundbreaking in its depiction of sex and graphic violence and in its exploration of mental illness, Psycho is often seen as marking a turning point in film history, simultaneously labeled as the first slasher film and a work of cinematic art. The film’s “shower scene” has taken on an iconic status as one of the most terrifying scenes ever filmed. What blooper did Hitchcock’s wife reportedly notice during one of the film’s final screenings before its official release? More…

Composed by: Bernard Herrmann
Performed by: City of Prague Philharmonic/Bateman

Posted in Educational, FILM, IN THE SPOTLIGHT, MEMORIES, MY TAKE ON THINGS, ONE OF MY FAVORITE THINGS, PEOPLE AND PLACES HISTORY, GEOGRAPHY, Uncategorized, YouTube/SoundCloud: Music, Special Interest

just a thought: “There is no difference between people, not that we’re born with, not of any significance.” (©always)

just a thought:  “There is no difference between people. Not in our make at least. The differences are pondered upon us by the culture and tradition of the people we’re born to. Our natural senses about the world around us are shaped into the likeness of those around us from early age, before we can determine by ourselves the values that are imposed upon us.

There is no difference between people, not that we’re born with, not of any significance.” (©always)

Posted in Educational, IN THE SPOTLIGHT, MEMORIES, MY TAKE ON THINGS, PEOPLE AND PLACES HISTORY, GEOGRAPHY, QUOTATION, SPIRITUALITY, Uncategorized

Selznick was an iconic producer during the early days of Hollywood. He worked for several Hollywood studios before founding his own Selznick International Pictures in 1936. He was renowned for intruding in his productions either through long detailed memos or by actually directing a few scenes. Selznick is best known for producing the epic film Gone with the Wind, which earned him an Oscar for Best Picture. The following year, he won a second consecutive Best Picture Oscar for what film? More… Discuss

Highsmith started out as a comic book artist before becoming known for her chilling tales of crime and cruelty. Alfred Hitchcock propelled her career by adapting her first novel Strangers on a Train, and Highsmith gained further attention as a master of psychological menace with her books about handsome and “talented” psychopath Tom Ripley. Like many of her characters, though, Highsmith was prone to self-destructive and bizarre behavior, including keeping about 300 of what in her garden? More… Discuss