Bishop of Milan, Italy, probably from 530, exiled by the Arian Ostrogoths. When Milan was attacked by the Goths, General Belisarius of Constantinople, failed to aid the city. It is believed that Datius was taken prisoner for a time but was freed by his friend Cassiodorus. He went to Constantinople to support Pope Vigilius against Emperor Justinian in the Three Chapter Controversy of 545 . He probably died there.

this day in the yesteryear: Bartholomew I Becomes Patriarch of Constantinople (1991)

Bartholomew I Becomes Patriarch of Constantinople (1991)

The Ecumenical Patriarch of Constantinople serves as the Archbishop of Constantinople and as spiritual leader and chief spokesperson for the Eastern Orthodox Church. The current Patriarch, Bartholomew I, has been particularly active internationally, working to rebuild the Orthodox churches of the former Eastern Bloc following the fall of Communism and continuing reconciliation dialogues with the Roman Catholic Church. His reputation as an environmentalist has earned him what nicknames? More… Discuss

The story of Roxelana is a true rags-to-riches tale. Little is known of her early life, but she was likely born in Ukraine in the 16th century. At some point, she was captured by Crimean Tatars and taken as a slave. Brought to Constantinople (now Istanbul), she was selected to be a concubine in the harem of Sultan Suleiman the Magnificent. Roxelana soon gained Suleiman’s favor and—in a shocking break with tradition—he made her his legal wife. What did this mean for the sons she bore him? More… Discuss

this day in the yesteryear: Bulgaria Gains Independence (1908)

Bulgaria was absorbed into the Ottoman Empire in 1396, but Turkish rule was often oppressive, and rebellions were frequent. In 1908, taking advantage of the Young Turk revolution in Constantinople and the annexation of Bosnia and Herzegovina by Austria, Prince Ferdinand proclaimed Bulgaria independent with himself as czar. Bulgaria then became involved in a series of conflicts—two Balkan Wars and World War I—that led to Ferdinand’s abdication. Why was Bulgaria regarded as the Balkan Prussia? More…

Patriarch of Constantinople, modem Istanbul. He was born in Syracuse, Sicily, and built a monastery on the island of Chios. After some time in Constantinople, he was sent to Rome in 815 as the … continue reading

SAINT OF THE DAY

SAINT OF THE DAY
Catholic saints are holy people and human people who lived extraordinary lives. Each saint the Church honors responded to God’s invitation to use his or her unique gifts. God calls each one of us to be a saint. Click here to receive Saint of the Day in your email.

April 13
St. Martin I
(d. 655)
When Martin I became pope in 649, Constantinople was the capital of the Byzantine empire and the patriarch of Constantinople was the most influential Church leader in the eastern Christian world. The struggles that existed within the Church at that time were magnified by the close cooperation of emperor and patriarch.

A teaching, strongly supported in the East, held that Christ had no human will. Twice emperors had officially favored this position, Heraclius by publishing a formula of faith and Constans II by silencing the issue of one or two wills in Christ.

Shortly after assuming the office of the papacy (which he did without first being confirmed by the emperor), Martin held a council at the Lateran in which the imperial documents were censured, and in which the patriarch of Constantinople and two of his predecessors were condemned. Constans II, in response, tried first to turn bishops and people against the pope.

Failing in this and in an attempt to kill the pope, the emperor sent troops to Rome to seize Martin and to bring him back to Constantinople. Already in poor health, Martin offered no resistance, returned with the exarch Calliopas and was then submitted to various imprisonments, tortures and hardships. Although condemned to death and with some of the torture imposed already carried out, Martin was saved from execution by the pleas of a repentant Paul, patriarch of Constantinople, who was himself gravely ill.

Martin died shortly thereafter, tortures and cruel treatment having taken their toll. He is the last of the early popes to be venerated as a martyr.

The real significance of the word martyr comes not from the dying but from the witnessing, which the word means in its derivation. People who are willing to give up everything, their most precious possessions, their very lives, put a supreme value on the cause or belief for which they sacrifice. Martyrdom, dying for the faith, is an incidental extreme to which some have had to go to manifest their belief in Christ. A living faith, a life that exemplifies Christ’s teaching throughout, and that in spite of difficulties, is required of all Christians. Martin might have cut corners as a way of easing his lot, to  make some accommodations with the civil rulers.

The breviary of the Orthodox Church pays tribute to Martin: “Glorious definer of the Orthodox Faith…sacred chief of divine dogmas, unstained by error…true reprover of heresy…foundation of bishops, pillar of the Orthodox faith, teacher of religion…. Thou didst adorn the divine see of Peter, and since from this divine Rock, thou didst immovably defend the Church, so now thou art glorified with him.”

The Nestorian Stele is an ancient stone artifact that reveals a Christian presence in 7th-century China. The Christian sect of Nestorianism originated in 5th-century Constantinople and reached China through missionaries. Inscribed in both Chinese and Syriac, the almost 10-foot (3-m) limestone stele, or stone slab, describes the existence of Christian communities in northern China and reveals that the Emperor Taizong had recognized Christianity by 635 CE. When was the stele unearthed?More… Discuss

This Day in the Yesteryear: BRIDGE SPANS THE BOSPHORUS TO CONNECT EUROPE AND ASIA (1973)

Bridge Spans the Bosphorus to Connect Europe and Asia (1973)

The shores of the Bosphorus Strait were once lined with fortifications built by Byzantine emperors and Ottoman sultans protecting Constantinople. Today, one of the world’s longest suspension bridges spans the Bosphorus, linking European Turkey with Asian Turkey. The bridge was completed on October 30, 1973—one day after the Turkish republic‘s 50th anniversary. A second bridge was finished in 1988. Which American comedian led children across the first bridge during its opening ceremony? More… Discuss 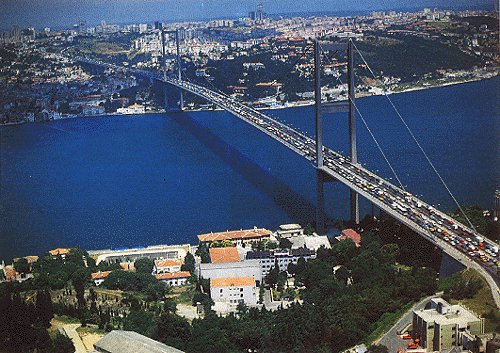 Forbidden Knowledge We investigate the castle that helped create Great Britain and learn why it was such an impregnable fortress. Then it’s off to discover the invisible underground defensive systems of Cappadocia and how they proved so successful they are they longest continually inhabited fortress in history. We test the ancient Mayan killer bee castle defences, and release bees in an attack. We build a replica section of the ancient Roman fort of Alesia and discover whether the great general Julius Caesar could really have built 24 miles of defences in just 6 weeks. We investigate the most impregnable walls in history – the multi-layered defences of Constantinople – and discover the type of cannon that the sultan Mehmet used to finally destroy them in the great siege of 1453. Finally, we fire one of these cannons for the first time in hundreds of years and collect invaluable ballistic data.

This is the story of a book that could have changed the history of the World. To the untrained eye, it is nothing more than a small and unassuming Byzantine prayer book, yet it sold at Christies for over $2m. For faintly visible beneath the prayers on its pages are other, unique, writings – words that have been lost for nearly two thousand years.

The text is the only record of work by one of the world’s greatest minds – the ancient Greek, Archimedes – a mathematical genius centuries ahead of his time. Hidden for a millennium in a middle eastern library, it has been written over, broken up, painted on, cut up and re-glued. But in the nick of time scientists have saved the precious, fragile document, and for the first time it is revealing just how revolutionary Archimedes’ ideas were. If it had been available to scholars during the Renaissance, we might have reached the Moon over a hundred years ago.

The trail begins in the tenth century, when a scribe made a unique copy of the most important mathematics that Archimedes ever developed. For 200 years the document survived, but the mathematics in it was so complex that no one paid it any attention. So when one day a monk was looking for some new parchment – an expensive commodity at the time – to write a new prayer book, the answer seemed obvious. He used the Archimedes manuscript. He washed the Greek text off the pages, cut them in half, rebound them, and turned the Archimedes manuscript into an everyday prayer book. As he piously wrote out his prayers, he had no idea of the genius he was obliterating.

Several hundred years later, the Renaissance was under way. Scientists were beginning to grapple with new concepts, working out how mathematics could be used to explain the World around them. Little did they know that many of the problems they were just encountering Archimedes had already solved more than a thousand years before. So, tragically, they had to do that research all over again, setting back the development of science and technology immeasurably.

Then in 1906, in Constantinople, the document mysteriously turned up in a monastic library. An opportunistic scholar called Johan Ludwig Heiberg identified the text as Archimedes’ writings. Although the Greek text was very faint, Heiberg was able to decipher some of it. What he found astonished him, and made the front page of the New York Times. He revealed that Archimedes’ manuscript contained something called ‘The Method’, which showed not only Archimedes’ final proofs, but for the first time revealed the process of how he went about making his discoveries.

Posted in Educational, FILM, IN THE SPOTLIGHT, MEMORIES, MY TAKE ON THINGS, PEOPLE AND PLACES HISTORY, GEOGRAPHY, Uncategorized