listen); 1 April [O.S. 19 March] 1917 – 2 December 1950) was a Romanian classical pianist and composer whose career was cut short by his death from causes related to Hodgkin’s disease at age 33. He was elected posthumously to the Romanian Academy.

Constantin Lipatti (from childhood called by the diminutive “Dinu”) was born in Bucharest into a musical family: his father was a violinist who had studied with Pablo de Sarasate and Carl Flesch,[1] his mother a pianist. For his baptism, which occurred not shortly after birth as is usual, but when he was old enough to play the piano, the violinist and composer George Enescu agreed to be his godfather. Lipatti played a minuet by Mozart at his own baptism.[1] He studied at the Gheorghe Lazăr High School, while studying piano and composition with Mihail Jora for three years. He then attended the Bucharest Conservatoire, studying under Florica Musicescu, who also taught him privately.[1] In June 1930, the best pupils at the Conservatoire gave a concert at the Bucharest Opera, and the 13-year-old Lipatti received a huge ovation for his performance of the Grieg Piano Concerto in A minor.[1] In 1932 he won prizes for his compositions: a Piano Sonatina, and a Sonatina for Violin and Piano. That year he also won a Grand Prize for his symphonic suite Les Tziganes.[1]

He entered the 1933 Vienna International Piano Competition but finished second to Polish pianist Bolesław Kon, some say controversially. Alfred Cortot, who thought Lipatti should have won, resigned from the jury in protest.[2] Lipatti subsequently studied in Paris under Cortot, Nadia Boulanger (with whom he recorded some of Brahms‘s Waltzes Op. 39), Paul Dukas (composition) and Charles Munch (conducting). At eighteen, Lipatti gave his recital debut in Paris at the École Normale. On 17 May 1935, three days before the concert, his friend and teacher, Paul Dukas, died and in his memory Lipatti opened his program with J. S. Bach‘s Jesu, Joy of Man’s Desiring in the transcription by Myra Hess,[1] the first piece he publicly performed as an adult pianist.

Lipatti’s career was interrupted by World War II. Although he gave concerts across the Nazi-occupied territories, as the war grew closer he fled his native Romania with his companion and fellow pianist, Madeleine Cantacuzene, settling in Geneva, Switzerland where he accepted a position as professor of piano at the conservatory. It was at this time that the first signs of his illness emerged. At first, doctors were baffled, but in 1947 he was diagnosed with Hodgkin’s disease[3]

He and Madeleine eventually married in 1947 but Lipatti’s health continued to decline. As a result, his public performances became considerably less frequent after the war. His energy level was improved for a time by then experimental injections of cortisone and his collaboration with record producer Walter Legge between 1947 and 1950 resulted in the majority of the recordings of Lipatti’s playing.

Lipatti gave his final recital, also recorded, on 16 September 1950 at the Besançon Festival in France. Despite severe illness and a high fever, he gave superb performances of Bach’s Partita No. 1 in B-flat major, Mozart’s A minor Sonata, K. 310, Schubert‘s G flat major and E flat major Impromptus, Op. 90, and thirteen of the fourteen Chopin Waltzes which he played in his own integral order. Coming to the last one, No. 2 in A-flat, he found he was too exhausted to play it and he offered instead Jesu, Joy of Man’s Desiring, the piece with which he had begun his professional career only fifteen years before. He died less than 3 months later in Geneva aged 33, from a burst abscess on his one lung.[3] Lipatti is buried at the cemetery of Chêne-Bourg next to his wife Madeleine (1915-1982), a noted piano teacher.[citation needed]

Lipatti’s piano playing was, and is, widely appreciated for the absolute purity of his interpretations, at the service of which he used a masterful pianistic technique. Lipatti is particularly noted for his interpretations of Chopin, Mozart and Bach, but he also made recordings of Ravel‘s Alborada del Gracioso, Liszt, Enescu, and the Schumann and Grieg piano concertos. His recording of Chopin’s Waltzes has remained in print since its release and has long been a favorite of many classical music-lovers.[citation needed]

Lipatti never recorded any music of Beethoven. It is a common misconception, however, that Lipatti did not perform Beethoven’s music until late in his career. The Waldstein Sonata had been a feature of Lipatti’s repertoire since 1935. He also performed the Emperor Concerto in Bucharest twice during the 1940–41 season, and even stood ready to record it for EMI in 1949. An internal memo from Lipatti’s recording producer Walter Legge, dated 23 February 1948, states that “Lipatti ha[d] his heart set on doing a Beethoven Concerto in 1949” and nominates the Emperor Concerto, given that Lipatti had already performed it.[citation needed]

A recording of Chopin’s Piano Concerto No. 1 in E minor, originally released under Lipatti’s name, and said to have been a recording of a live performance in Switzerland in May 1948, proved not to be his contribution at all. In 1981, it emerged that the soloist on this recording was in fact a Polish pianist (and a fellow Cortot pupil), Halina Czerny-Stefańska, the joint winner of the 4th International Chopin Piano Competition, playing with the Czech Philharmonic Orchestra under Václav Smetáček. However, later on, an authentic recording by Lipatti of the Chopin Concerto was found.[4]

The Pulitzer Prize-winning music critic Harold C. Schonberg wrote of Lipatti’s 1947–48 Chopin concert recordings: “this is piano-playing of a stature that few artists of his generation could have come near approaching”.[citation needed]

In recognition of his outstanding contributions to classical music interpretation and composition he was posthumously elected in 1997 as a member of the Romanian Academy.[citation needed]

In addition to his pianistic accomplishments, Lipatti was a composer, who wrote in a neoclassical style with French and Romanian influences. His works include:

The main theme of the first movement.

Franz Liszt composed his Piano Concerto No. 1 in E-flat major, S.124 over a 26-year period; the main themes date from 1830, while the final version dates 1849. The concerto consists of four movements and lasts approximately 20 minutes. It premiered in Weimar on February 17, 1855, with Liszt at the piano and Hector Berlioz conducting.

The main themes of Liszt’s first piano concerto are written in a sketchbook dated 1830, when Liszt was nineteen years old. He seems to have completed the work in 1849, yet made further adjustments in 1853. It was first performed at Weimar in 1855, with the composer at the piano and Hector Berlioz conducting. Liszt made yet more changes before publication in 1856. Béla Bartók described it as “the first perfect realisation of cyclic sonata form, with common themes being treated on the variation principle”.[citation needed] 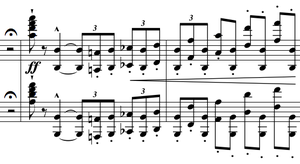 The first entrance in the first movement introduces a motive that is revisited several times.

The orchestra introduces the main theme of the piece with a powerful motif.[1] It is said that the main theme was set to the words “None of you understand this, haha!” (German: “Das versteht ihr alle nicht, haha!”) to deter any criticism from critics who did not like the piece’s originality.[2] The piano then comes in with an octave passage, spanning 4 octaves.

A duet is formed between the piano and the clarinet in a quiet and peaceful passage, yet this is soon taken over again by the main theme. Following this, the piano plays fast, downward chromatic octaves, before recapitulating a section from earlier in the movement, this time in G major. The movement finishes with the main theme played by the strings while the piano imitates a harp with fast, quiet arpeggios, culminating with an upwards chromatic scale in sixths, diminishing to ppp volume.

The cellos and double basses introduce the Adagio section in a serene, unison cantabile, before the rest of the string section joins. Again, however, the cellos and double basses descend before the piano joins, in una corda. The piano uses the string theme and develops it further, playing in a nocturne-like style with soft, flowing left hand arpeggios and a cantibile melody in the right hand. The section reaches a climax where a strong fortissimo is played followed by a descending diminuendo scale.

After a slight general pause, the whole orchestra joins, again playing the same theme. Then a cello plays the theme while the piano answers quickly and hurriedly with a developmental recitative section. This leads into a passage where solos in the woodwind section play a new theme while the piano plays long trills in the right hand and spread chords in the left. The passage is ended by the piano and clarinet in duet.

The triangle starts the movement with a string quartet following it. Next, the piano plays the same theme, yet develops it further. This occurs over the whole movement, however previous themes from the last two movements are re-introduced and combined together to give this concerto its unique rhapsody-like form. This movement is decidedly joking in character, with the performance direction at the start of the piano line of “capriccioso scherzando”, and delicate, playful duets between the woodwind and piano occurring throughout. The second half of the movement, however, takes a darker turn, when the piano, after concluding the scherzo section, plays an eerie, tremolando passage in the lower registers, with a development of the first theme played above, at pp dynamic. After this, the downward chromatic octaves reappear, but this time at p level, before the orchestra plays an ascending chromatic section, leading into a tonal recapitulation of the first theme. The movement ends with very similar music as the first movement begins, with a blistering piano passage ending in a F-diminished chord.

A descending E-flat major scale is played before the orchestra plays a new theme, the final of the concerto. The piano follows this with a blistering solo octaves passage before joining in duet with various solo woodwind instruments in a dainty, lively section, leading onto the rest of the movement, which many consider to be among the hardest music ever written for piano.

The movement continues bringing out all the themes from throughout the concerto at different times and combining them sequentially.

In the final few passages, new chromatic theme is introduced where the piano is playing semi-quavers and tripleted quavers at the same time, an exercise in polyrhythm, while in unison with the strings.

The piece is finished in the bravura style Liszt is famous for, with the now-familiar downward chromatic octaves theme, played in this recapitulation at breakneck presto speed, before changing to contrary chromatic octaves, reaching the tonic key of E-flat major and fff dynamic. The orchestra alone has the last two notes, which Liszt carefully utilised to highlight the importance of the orchestra in the piece, not just as an accompanying device for the piano.

This concerto is scored for a relatively small Romantic orchestra and calls for the following instruments: