this pressed- for the need to know: Chomsky: Business Elites Are Waging a Brutal Class War in America | Alternet 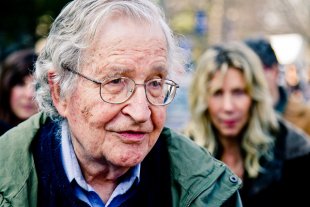 We don’t use the term “working class” here because it’s a taboo term. You’re supposed to say “middle class,” because it helps diminish the understanding that there’s a class war going on.

It’s true that there was a one-sided class war, and that’s because the other side hadn’t chosen to participate, so the union leadership had for years pursued a policy of making a compact with the corporations, in which their workers, say the autoworkers—would get certain benefits like fairly decent wages, health benefits and so on. But it wouldn’t engage the general class structure. In fact, that’s one of the reasons why Canada has a national health program and the United States doesn’t. The same unions on the other side of the border were calling for health care for everybody. Here they were calling for health care for themselves and they got it. Of course, it’s a compact with corporations that the corporations can break anytime they want, and by the 1970s they were planning to break it and we’ve seen what has happened since.

This is just one part of a long and continuing class war against working people and the poor. It’s a war that is conducted by a highly class-conscious business leadership, and it’s one of the reasons for the unusual history of the U.S. labor movement. In the U.S., organized labor has been repeatedly and extensively crushed, and has endured a very violent history as compared with other countries.

via Chomsky: Business Elites Are Waging a Brutal Class War in America | Alternet.