What the WikiLeaks documents reveal about US spying on French leaders
Francois Hollande apparently held secret meetings with Germany’s opposition and Nicolas Sarkozy believed he was the one who could lead the push to resolve the financial crisis in 2008, according to WikiLeaks documents (click to access story at THE TELEGRAPH)

Gregorios Yohanna Ibrahim, the Syriac Orthodox Archbishop of Aleppo, who was kidnapped near the Turkish border April 22, 2013. Courtesy of Aid to the Church in Need.

Aleppo, Syria, Mar 15, 2015 / 06:02 am (CNA/EWTN News).- On April 22, 2013, both the Greek and Syriac Orthodox archbishops of Aleppo, Boulos Yazigi and Gregorios Yohanna Ibrahim, were kidnapped in Syria near the Turkish border. Their driver, Deacon Fatha’ Allah Kabboud, was killed.

Today, 23 months later, the bishops remain missing – though for some time it has been rumored that only one of them is still alive.

The bishops were abducted on their way back from the Turkish border, where they were negotiating the release of two priests, Fathers Michael Kayyal and Maher Mahfouz, who had themselves been kidnapped in February 2013.

Archbishop Ibrahim and Archbishop Yazigi are only two of the multitude of victims of the Syrian civil war, which today is entering its fifth year.

The war has claimed the lives of more than 220,000 people. There are 3.9 million Syrian refugees in nearby countries, most of them in Turkey and Lebanon, and an additional 8 million Syrian people are believed to have been internally displaced by the war.

On March 15, 2011, demonstrations sprang up in Syria protesting the rule of Bashar al-Assad, the nation’s president and leader of its Ba’ath Party. The next month, the Syrian army began to deploy to put down the uprisings, firing on protesters.

Since then, the violence has morphed into a civil war which is being fought among the Syrian regime and a number of rebel groups: the rebels include moderates, such as the Free Syrian Army; Islamists such as al-Nusra Front and Islamic State; and Kurdish separatists.

Only about a week before his kidnapping, two years into the war, Archbishop Ibrahim had told BBC Arabic that Syrian Christians are in the same situation as their Muslim neighbors: “There is no persecution of Christians and there is no single plan to kill Christians. Everyone respects Christians. Bullets are random and not targeting the Christians because they are Christians.”

Archbishop Ibrahim had written a book in Arabic in 2006 called “Accepting the Other.” At that time, before the start of the war, Syrians of different religions lived together in peace.

An excerpt of this work, focused on “the dialogue of life,” was translated into English for Aid to the Church in Need and appears below thanks to that international Catholic charity, which has pledged $2.8 million in emergency aid for the Christians of Syria:

The plurality of religions and faiths does not foment an inter-religious conflict due to the fact that the common denominator of its teachings, heritages and ethics affirms the oneness of God and the multiplicity and integrity of its people.

Whenever Christians and Muslims approach the sources of divine teaching, they may feel that their common heritage is part and parcel of the universal belief of the relationship between man (the weak) and the Creator (the mighty). Christians say we have one God and Muslim say there is no God but God.

From this understanding of our common heritages derived the concept of the “Dialogue of Life” – to which we owe our peaceful coexistence and the flourishing of our communities. However, even given the rich ethno-religious diversity of our communal tapestry, it is not at all like the concept of multiculturalism that is emerging in Western society.

The “Dialogue of life” is a rather simple, spontaneous, and natural way of life – a sort of coexistence sustained by the values of solidarity, humanity, impartiality and accepting the other unconditionally. Some may argue that our “Dialogue of Life” draws on the principles outlined in the Geneva Convention. Not so, our “Dialogue” has its own unwritten codes, whose values far predate this relatively new Western concept of dialogue and coexistence.

via Read the words of an Orthodox bishop kidnapped in Syria nearly two years ago :: Catholic News Agency (CNA). In the summer of 1944, two French boys watch from a hilltop as convoys of Allied vehicles pass through the badly damaged city of St. Lo en route to the battle front. St. Lo was the scene of major fighting the latter stages of the Normandy campaign during World War II.

Valéry Giscard d’Estaing is a French political leader who rose through the ranks over nearly two decades to become president of France in 1974, defeating Socialist François Mitterrand, who would later unseat him in the 1981 election. A supporter of European economic integration, Giscard later served as a member of the European Parliament and as president of the Convention on the Future of Europe. What fueled rumors in 2009 that he had once had a fling with the late Diana, Princess of Wales? More… Discuss

Israeli Prime minister Benjamin Netanyahu, right, stands next to French Ambassador to Israel, Patrick Maisonnave, as he presents his condolences following Wednesday’s deadly attack on French satirical newspaper Charlie Hebdo’s offices, at the prime minister’s residence in Jerusalem on Friday, Jan. 9, 2015. Brothers suspected in the newspaper terror attack were cornered with a hostage inside a printing house on Friday, after they hijacked a car and police followed them to a village near Paris’ main airport. (AP Photo/Thomas Coex, Pool) (The Associated Press)

JERUSALEM – Israel’s prime minister says he will try to increase immigration of French Jews and others in Europe suffering from a “rising tide of anti-Semitism.”

Posted in Educational, FILM, IN THE SPOTLIGHT, MEMORIES, MY TAKE ON THINGS, ONE OF MY FAVORITE THINGS, PEOPLE AND PLACES HISTORY, GEOGRAPHY, QUOTATION, Special Interest, Uncategorized, YouTube/SoundCloud: Music, Special Interest

Chirac, a French political leader, was president of France from 1995 to 2007, served twice as prime minister, and was the mayor of Paris for nearly two decades. As president, he sought to reduce unemployment, cut the deficit, and strengthen ties with Germany. In the early 2000s, Chirac was implicated in a number of corruption scandals, and, in 2011, he was convicted on corruption charges. In 2002, Chirac survived an attempt on his life during celebrations of what French national holiday? More… Discuss 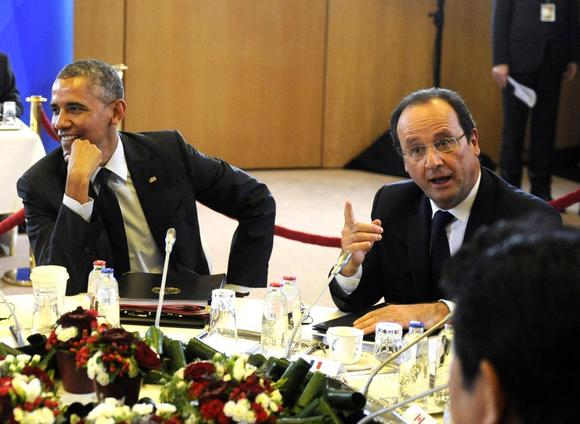 Euro ministers under pressure to make progress (from France 24 International)

French President Francois Hollande (R) and German Chancellor Angela Merkel attend a ceremony in the Cathedral on July 8, 2012 in the northern French city of Reims, during a day of ceremonies to commemorate the 50th anniversary of renewed Franco-German relations after World War II.

File photo of Eurogroup president Jean-Claude Juncker. Monday’s meeting may also discuss who should succeed Juncker, who is due to step down on July 17, as head of the eurozone finance ministers group.

European leaders hailed a June 28-29 EU summit as a breakthrough, promising fresh capital for Spain’s struggling banks, a European bank union to keep the lenders in line and making it easier for the bloc’s new bailout fund to help states in trouble.    Read more

Excerpts: “A tale of two countries

It’s the war of the meetings in today’s papers – with just 6 days to go before the first round of the election, both Nicolas Sarkozy and François Hollande held major open-air rallies yesterday. “