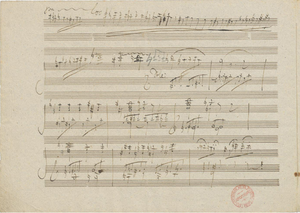 Special for my German fans! List of info for upcoming concerts in Deutschland in the next couple of weeks below . Munchen (Mar24), Stuttgart(Mar27), Heidelberg(Apr 7)
Do come ! For Beethoven and more :-)))
http://www.muenchenmusik.de/veranstal…
http://www.sks-russ.de/veranstaltunge…
http://heidelberger-fruehling.de/cont…

Beethoven’s Symphony No. 5. The Destiny Symphony

Beethoven’s 5th Symphony in C minor, op. 67 is rightly considered a natural continuation of Symphony No. 3, “Eroica”, because it approaches the same themes and it expresses the relationship between particular and general. The name under which it sometimes circulated, ” The Symphony of Destiny “, is linked to the words of Anton Felix Schindler, his biographer, who, invoking an explanation given by the composer referring to the first bars in Part I of the fifth symphony, stated: ” So pocht das Schicksal an die Pforte! ” (That’s how destiny knocks on your door).

Significantly relevant is the chronicle written for this symphony at the January 1st 1841 concert: ” Beethoven’s symphony in C minor had closed the programme. Let us be silent! How often we hear it in public, but also in our deepest self, and how it projects its force upon all people of all ages, just like the great natural phenomena, which leave us in awe every time they appear. This symphony alike, will still resound centuries to come, for as long as there will be man and music.”

Part I – Allegro con brio – is unique through its sonata structure and a theme constructed with a rhythmical-melodic cell of just four notes, which is also the key motif of the entire symphony.

We must emphasize that the generating motif of this part also appeared in other works, either in the composer’s creation (sonata Appassionata), either in Mozart or Haydn’s works.

Part II – Andante con moto – it has a lyrical theme with a hymnal resonance, even festive, permanently reminding of the somewhat dramatic tone of the first theme. The two thematic elements are the basis of the variational processes, at first lyrical and temperate and ultimately expressing bliss.

Part III – Allegro – has a free form, neither scherzo nor intermezzo, but constitutes itself as an epilogue to the dramatism in Part I and a prologue to Part IV. This is considered to be the key moment of the entire symphony, both psychologically and from the point of view of the musical construction.

Part IV – Allegro – brings many new elements which constitute a genuine surprise. In the exuberance and joyfulness of the musical construction a lyrical theme suddenly appears – an oboe that comes closer to a recollection, reminiscence. This segment takes a festive march theme expressing joy and absolute victory.

Beethoven’s 5th Symphony in C minor op. 67 was presented in first audition on December 22nd 1808 in the concert hall of the Vienna Theatre with the composer himself as conductor. On this occasion, musician Johann Friedrich Reinchardt of Cassel asserted that ” it is a grand, very elaborate, too long of a symphony in C minor…” , thus once more demonstrating the novelty of Beethoven’s musical language and his contemporaries’ incapacity to understand his genius.