Peril in the West: Erionite 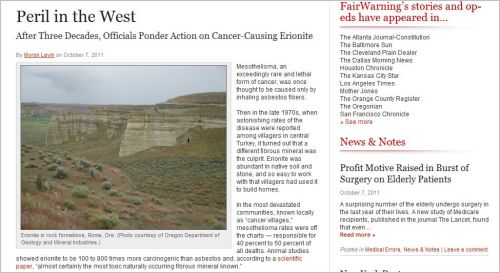 Mesothelioma, an exceedingly rare and lethal form of cancer, was once thought to be caused only by inhaling asbestos fibers.

Then in the late 1970s, when astonishing rates of the disease were reported among villagers in central Turkey, it turned out that a different fibrous mineral was the culprit. Erionite was abundant in native soil and stone, and so easy to work with that villagers had used it to build homes.

In the most devastated communities, known locally as “cancer villages,” mesothelioma rates were off the charts — responsible for 40 percent to 50 percent of all deaths. Animal studies showed erionite to be 100 to 800 times more carcinogenic than asbestos and, according to a scientific paper, “almost certainly the most toxic naturally occurring fibrous mineral known.”

Posted in Asbestos toxicity, Educational, Health and Environment, IN THE SPOTLIGHT, Uncategorized