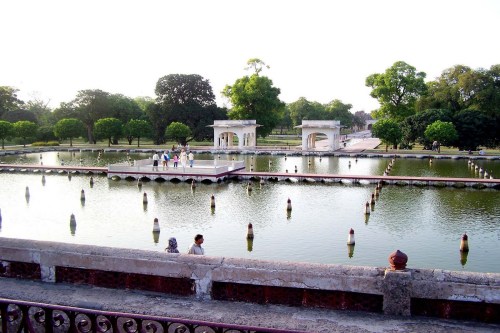 The reign of Emperor Shah Jahan in India saw the construction of the finest monuments of Mughal architecture, including the Taj Mahal and the Shalimar Gardens. The gardens were completed in Lahore, in what is now Pakistan, in 1642. Only three sections remain of the original seven, which symbolized the divisions of the Islamic paradise. The three descending terraces are elevated about 15 feet (5 m) above one another and are laid out in a parallelogram. How many fountains are in the gardens? More… Discuss

Posted in Educational, Health and Environment, IN THE SPOTLIGHT, MEMORIES, MY TAKE ON THINGS, News, ONE OF MY FAVORITE THINGS, PEOPLE AND PLACES HISTORY, GEOGRAPHY, Special Interest, Uncategorized

The Taj Mahal in Agra, India, is considered one of the most beautiful buildings in the world and the finest example of the late style of Indian Islamic architecture. Mughal emperor Shah Jahan ordered it built as a mausoleum for his favorite wife, Mumtaz Mahal. The building’s white marble exterior is inlaid with semiprecious stones arranged in Arabic inscriptions, floral designs, and arabesques, and its gardens reflect the Islamic Paradise. When was the monument’s construction begun? More… Discuss

A devout Hindu, Shivaji grew up hating the Mughal Empire that controlled most of his native India. Around 1655, he began making guerrilla attacks on the Muslim kingdom of Bijapur, gradually carving out his own domain. He lured the Bijapur army to its destruction, becoming a formidable warlord overnight by taking the army’s equipment. He then established the Maratha Empire, which was noted for its religious tolerance. How did he once make a daring escape from the Mughal emperor’s palace? More… Discuss