In northern California, the tarantula mating season begins in mid-August and lasts through early November, during which time many of the spiders cross the roads at Henry W. Coe State Park. Park rangers view the mass exodus as a great opportunity to hold a festival and a barbecue. The bolder attendees of the festival go for the tarantula-handling. Some even muster the courage to pose for pictures as the spiders crawl on their faces. There are also displays of non-native tarantulas and a raffle, and the park’s visitor center offers more information about tarantulas and the park. More… Discuss

The world’s largest spider, the Goliath tarantula is also a venomous killer that liquefies its prey. Gustavo Hormiga, a biology professor at George Washington University, explains the arachnid‘s ferocious hunting strategy—and why there’s no need to fear it unless you’re the size of a mouse.

Just in time for Halloween, read more about the world’s biggest spider:
http://newswatch.nationalgeographic.c…

Warning about Brown Widow Spiders In SoCal-Orange County – via KTLA 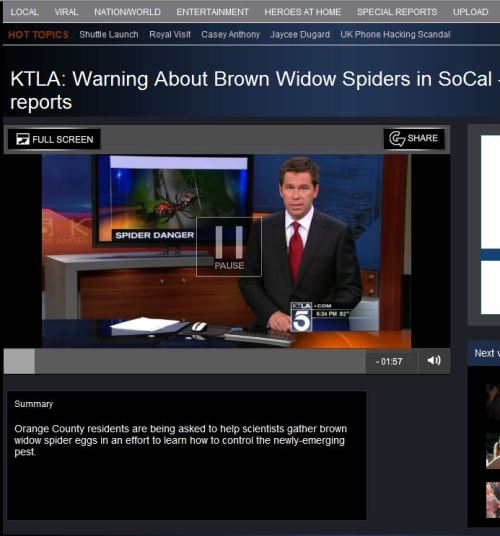 The spider Latrodectus geometricus, commonly known as the brown widow, grey widow, or geometric button spider, is one of the widow spiders in the genus Latrodectus. As such, it is a “cousin” to the more famous Latrodectus mactans. The brown widow is found in parts of the southeastern, southern and southwestern United States (including Florida, Alabama, California, Oklahoma, Nevada, Louisiana, Mississippi, Georgia, South Carolina, North Carolina, Tennessee, Arizona, New Mexico and Texas); as well as in parts of Australia, Afghanistan, South Africa and Cyprus.[citation needed] The origin of this species is uncertain, as specimens were independently discovered in both Africa and the Americas. They are usually found around buildings in tropical areas.
(Source: http://en.wikipedia.org/wiki/Latrodectus_geometricus)