Czech philharmonic orchestra, Václav Neumann
–
Česká filharmonie, Václav Neumann
EN
Symphony no.3 in E flat major was premiered by Bedřich Smetana in 1874. It was a great moment for young Dvořák, because it was his first big score played in public. You can heard in this symphony typical dvořák’s melodies but also some inspiration from Liszt or Wagner (work with motives, harmonies). 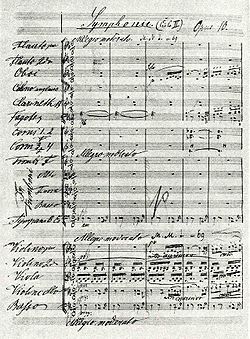 The Symphony No. 3 in E-flat major, Op. 10, B. 34 is a classical composition by Czech composer Antonín Dvořák.

It is not known precisely when the work was created (Dvořák scratched out the note on the title page with a knife so effectively that it is not possible to reconstruct the most important data).[1] However, the symphony was composed probably in 1872, but possibly not scored until the following year.[1] It is also not possible to find out with certainty the original text of the work. It was premiered by Prague Philharmonic Orchestra on March 29, 1874 at the fourth philharmonic concert in the hall on Žofín (Sophia Island), conducted by Bedřich Smetana. The composition was revised by Dvořák in 1887–1889, though not printed until 1912 (after the composer’s death) by N. Simrock in Berlin.

The work, unlike his other symphonies, is in three movements:

There is no scherzo, the 3rd being the only three-movement symphony he wrote. The Adagio molto is his longest symphonic slow movement, and the Finale is the shortest finale. It was the first of his symphonies that Dvořák heard played.

The symphony bears the marks of Dvořák’s preceding strongly neo-romantic period, but also show the progress towards classically disciplined progression.[2] A typical performance of the work has a duration of about thirty minutes.