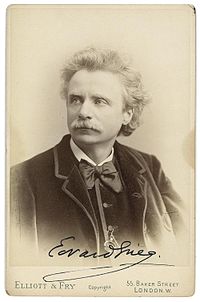 Edvard Grieg, in a photograph taken in 1888 by Elliott & Fry

Peer Gynt, Op. 23, is the incidental music to Henrik Ibsen‘s 1867 play of the same name, written by the Norwegian composer Edvard Grieg in 1875. It premiered along with the play on 24 February 1876 in Christiania(now Oslo).[1]

Edvard Grieg (1843-1907) was one of the definitive leaders of Scandinavian music and his influence was great. Although composing many short piano pieces and chamber works, the work Grieg did for Henrik Ibsen stood out. Originally composing 90 minutes of orchestral music for the play, he later went back and extracted certain sections for the suites. Peer Gynt’s travels around the world and distant lands are represented by the instruments Grieg chooses to use.[2]

When Ibsen asked Grieg to write music for the play in 1874, he reluctantly agreed. However, it was much more difficult for Grieg than he imagined. “Peer Gynt progresses slowly,” he wrote to a friend in August 1874, “and there is no possibility of having it finished by autumn. It is a terribly unmanageable subject.”[3]

“The more he saturated his mind with the powerful poem, the more clearly he saw that he was the right man for a work of such witchery and so permeated with the Norwegian spirit,” his wife wrote of him and his music.[4]Even though the premiere was a “triumphant success”, it prompted Grieg to complain bitterly that the Swedish management of the theatre had given him specifications as to the duration of each number and its order: “I was thus compelled to do patchwork… In no case had I opportunity to write as I wanted… Hence the brevity of the pieces,” he said.[3]

For many years, the suites were the only parts of the music that were available, as the original score was not published until 1908, one year after Grieg’s death, by Johan Halvorsen.[5]

Various recordings have been made of this music. Some recordings that claim to contain the complete incidental music have 33 selections;[6]the recording conducted by Ole Kristian Ruud is split into 49 items.[7]Both recordings include several verses from the drama, read by actors.

The original score contains 26 movements:[5] Movements indicated in bold were extracted by Grieg into two suites.

Over a decade after composing the full incidental music for Peer Gynt, Grieg extracted eight movements to make two four-movement suites. The Peer Gynt suites are among his best-known works, however they initially began as incidental compositions. Suite No. 1, Op. 46 was published in 1888, and Suite No. 2, Op. 55 was published in 1891. A typical rendition of both suites lasts 20 to 35 minutes.

Originally, the second suite had a fifth number, The Dance of the Mountain King’s Daughter, but Grieg withdrew it.[9]